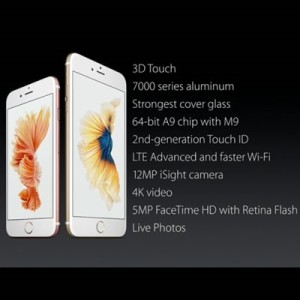 We’re around one week after the iPhone 6S Keynote and I suggest you to take a look at the way Apple promoted its latest flagships. As expected the spotlights are on the 3D Touch technology, which truly is an impressive innovation and not just a re-branded Force Touch, as some publishers label it. The slogan of the 2015 iPhones is “The only thing that’s changed is everything”.

Considering that the S-series maintain the design and shape of the older model, Apple wants to emphasize that everything else, besides the aspect, has been upgraded and that’s about right. The iPhone 6S can be considered the S-series with the most upgrades from the franchise. New Cameras, stronger case materials, faster processors, better graphics, rapid Wi-Fi and Bluetooth connections as well as an improved Touch ID sensor are all enhancements that Apple promote when advertising their flagships! But what happens with the other specs that weren’t mentioned during the live presentation?

10 iPhone 6S Upgrades
1. 3D Touch: fills up the iPhone’s screen with capacitive sensors that have the ability to measure the slightest pressing forces. Practically it’s another layer added to the gadget’s display causing the slight 0.2 mm depth increase, when compared to the iPhone 6S. 3D Touch is an advanced Force Touch technology that can differentiate between light and deep presses.
2. 7000 Series Aluminum: is a technology also borrowed from the Apple Watch. It’s a more stronger Aluminum alloy that will surly prevent Bendgate from spreading out to iPhone 6S.
3. Strongest Cover Glass: is advertised as a more scratch free resistant glass. It’s not sapphire, but it’s also an element borrowed from the Apple Watch Sport, a much appreciated new entry gadget.
4. 64-bit A9 Chip with M9: This is the first time, since the Cupertino’s added the Motion processor to its iPhones, when they embedded it within the A9 chip. This makes it a co-processor that’s always on and ready to help.
5. 2nd-generation Touch ID: Considering that the 1st gen Touch ID was great, we can safely assume that its upgrade will work flawlessly on the iPhone 6S units.
6. LTE Advanced & Faster Wi-Fi: Apple praises its new flagships as being almost double as fast when it comes to mobile data and Wi-Fi connectivity.
7. 12 MP iSight Camera: is perhaps the most expected upgrade in recent years. The iPhone 6S receives a 4 MP jump from the 8 MP one available from a few generations ago.
8. 4K Video recording is a much expected feature too. More, you’ll be able to edit your footages directly on the iPhone with the help of iMovie. However, with 4K video you have to consider what storage you pick when you buy the iPhone 6S. Unfortunately, Apple has decided to keep the 16 GB limit as entry level, followed by 64 GB and 128 GB.
9. 5MP FaceTime HD with Retina Flash: The front facing camera has also been updated to 5MP allowing you to capture high quality Selfies and perform HD FaceTime calls with your iOS contacts.
10. Live Photos is one last eye-catching feature. Pictures move on the new iPhone 6S with the help of a special picture capturing technology and 3D Touch!

iPhone 6S Unconfirmed Specs
– Apple did not mention a single word about the iPhone 6S battery size during the Keynote. Rumors claim that the power source might be 100 mAh smaller, when compared to the one available on the iPhone 6. That’s mainly because of lack of space, sacrificed for the new taptic engine and 3d touch display.
However, due to software and hardware improvements the iPhone 6S battery time will remain the same to the values obtained by its older sibling.
– There’s also no official info about Memory size, although credible leaks placed it at 2 RAM. That’s double the size of the previous version.