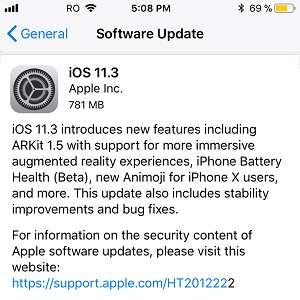 iOS 11.3 is the third major update to the 11th iOS generation. It includes a series of new features, changes as well as several bug fixes. Some of them have been already covered by us during the beta testing stages. The ARKit version 1.5 is a significant addition for Augmented Reality fans. This new version allows developers to place digital objects on the vertical axis too and not only on the horizontal one.

The iPhone Battery Health feature is also a major addition, especially after the huge scandal that uncovered the fact that Apple was throttling down old iPhone models in order to prevent sudden shutdowns because of aged battery problem. Now, with the help of the Performance Management Controls you can agree if you want to intentionally slow down your device to release the load on the battery! Read on to find out about other important additions.

Most Important iOS 11.3 Changes
We’ve tested out iOS 11.3 for several days and here are the 10 most important new features and changes from our point of view:
10. App Store Customer Review Filters: This is a welcomed addition especially for those of you that like to read app review before purchasing the software from the App Store. Now, you can filter the reviews by: Most Recent, Most Helpful, Most Favorable or Most Critical.
9. Smart Invert Expands: Smart Invert Colors is a new feature added in iOS 11 that is Apple’s closest take to the much awaited Dark mode. iOS 11.3 expends its functionality by adding support for images on the web and in Mail messages.
8. Incoming Calls & Display Fix: A bug in iOS 11 was preventing the iPhone display from lighting up when an incoming call was ringing. This issue has been fixed.
7. Updated Music Videos Section: Exclusive video playlists are now available in a revamped Music Videos section of Apple Music.
6. Health Records: Accessing your health data and reading lab results, your immunization history and more is now available directly from a timeline in the Health app. (This feature is currently only available in the U.S.).
5. Business Chat: The in-house iMessage system, receives a new Business chat feature that allows users to directly and easily perform inquiries, make appointments and even purchases within the Messages app.
4. New Animojis: have been added to the iPhone X. Check them out here!
3. iPad Charge Management: A very important new feature that allows users to preserve the iPad’s battery when the device is connected to a power source for a prolonged period of time. For example, if you use your iPad to display something 24/7 and have it connected to a power source all the time, the charge management feature will optimize the usage to prevent rapid battery ageing.
2. Augmented Reality Updates: As already mentioned above, the ARKit 1.5 has been released. On top of that, the software is now able to detect images like movie posters and embed them into AR experiences. Last but not least the system now also supports a higher resolution for the real world camera view.
1. iPhone Battery Health: Know how strong your iPhone battery is compared to it’s new state. Receive info when you need to change it and decide if you want to keep the Performance Management feature ON. The option is disabled by default, but will automatically activate in case of an unexpected shutdown. Then, you are able to disable it if you want.

iOS 11.3 Full Update Log
If you want to read all additions, changes and fixes included in iOS 11.3 please play the video available below:

Important: We strongly recommend you to update to iOS 11.3 if you haven’t done it already! Nevertheless, if you own an iPhone 8 that had a scree replacement performed by a third-party service shop, you might need to think twice because of this!

Fact: If you’re wondering if iOS 11.3 is the last major update of this cycle, the answer is no! iOS 11.4 is already available to Developer and Public beta testers!