3D Touch And Swipe For Quick Replies In iOS Messages

The iPhone 6S and 6S Plus flagships come with a full range of gesture shortcuts and hidden menus, enabled with the help of the revolutionary 3D Touch technology. The experience gets more and more spectacular every day, because new third party apps update with support for iOS 9 and the one of a kind Force Touch system.

But not only App Store softwares come with surprises. The iOS 9 native applications have also a lot of shortcut combos that are slowly but surly discovered by the Apple community. A few days ago, we’ve shown you how to open the App Switcher screen, using a combination of a firm press at the left edge of the iPhone 6S display, followed by a horizontal swipe towards the right side of the screen. This spares you from double pressing the home button, to easily switch between apps running in the backgorund. 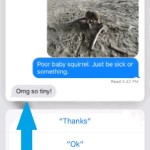 Another efficient 3D Touch involving shortcut can be used within the native Messages app. When browsing conversations, you can lightly press on the desired thread to Peek at the most recent text exchanges. If the context suits a short reply, swipe-up while maintaining the press to unveil the Quick Replies menu. They include suggested responses, using the same technology available on the Apple Watch, when replying to a text. You can choose between predefined answers like: “Thanks”, “OK”, “Talk Later?” or “Custom…”. The last option opens the thread in question, allowing you to type your desired message. It’s practically the same action obtained with a Pop (a deeper press after the initial one that previews the thread.)

Fact: Peek and Pop are the standard 3D Touch functions. Nevertheless, in certain apps, if they’re combined with swipe actions, they bring up additional Quick Actions such as Quick Replies in Messages, Reply All or Forward within the Mail app and much more.

Tip: 3D Touch sensitivity is customizable. Visit the Settings app and tweak the amount of pressure you need to apply on your iPhone 6S or 6S Plus’s screen in order to trigger the respective Force Touch feature!