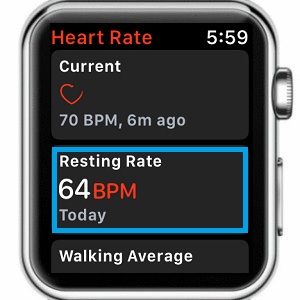 I’m not talking about the carrier connectivity feature, which is obviously limited to the Apple Watch Series 3 models with LTE hardware support. For example, one of the features missing from the original Apple Watch in watchOS 4 is the resting heart rate, which informs the user about the number of his or hears heartbeats registered per minute when inactive. This along with the walking heart rate are only available for Apple Watch Series 1 or later models.

3. Heart Rate Notifications
watchOS 4 can notice if you’re inactive and your heart rate remains above a chosen value, measured in beats per minute (BPM). A notification is issued to make you aware about this occurrence and potential heart problem. This feature isn’t available for the Apple Watch Series 0

4. Synced Music Playlists & Workouts
Apple Watch Series 1 and newer models are able to automatically start playing a synced music playlist when you start a workout. This is also not possible on the original Apple Watch.

Fact: There are many reports that also claim that the Apple Watch Series 0 battery isn’t able to sustain one full day of usage when the device is running watchOS 4. This happens primarily because of ageing and slowly degradation of the battery, but also because the chip on the AW0 has to handle more tasks when running a more complex OS!