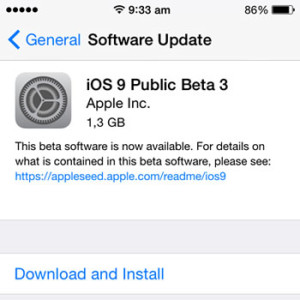 Apple has just seeded its third Public Beta of the 9th generation iOS version, as well as the iOS 9 Developers Beta 5 firmware. The two updates are pretty much identical, so if you plan to upgrade to iOS 9, before the official release (scheduled for this fall), and test out the latest additions, I recommend you to opt for the public beta patch. But first, let me inform you about some of the most important changes coming with this release. Public Beta 3 is now available exactly 16 days after it’s previous version!

If you’re looking for info about how to install iOS 9 Public Beta 3 on your iPhone, iPad or iPod Touch, please check our tutorial, published for the first beta version. Steps are identical when it comes to version three.

7 iOS 9 Public Beta 3 New Features and Additions
After only a few hours of reviewing this new beta, the software seems sharper and more stable as its predecessor. Besides other minor bug fixes, here are some new features and additions that we’ve noticed, so fa,r and we consider worth mentioning:

1. Shuffle All Button: Apple Music has finally received a shuffle option when playing tracks from the My Music tab. Instead of having songs aired one after the other in the same order, you can hit the new Shuffle All button. It’s available at the top of the screen, right above the Recently Added field. 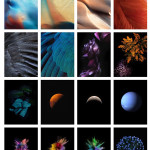 2. New Wallpapers: A complete set of new Stills background images is available with this beta version. Feathers, planets, flowers you name it. Check them out and download them now. One strange thing is that what seemed to be the trademark iOS 9 wallpaper, introduced during WWDC 2015, has been removed. I can only assume that it will be re-added just in time for the official launch, scheduled this autumn. However, you can still download it anytime from here.

3. Shift/Backspace Keys: A small keyboard revamp highlights the Shift and Backspace keys better. Their outline and behavior while interacting with them is also slightly changed, in order to improve the user experience.

4. Wi-Fi Assist: This is a really interesting new addition. Until now Wi-Fi connectivity was always the No. 1 priority when it came to Internet access. With Wi-Fi Assist toggled ON, your iPhone will be able to switch from Wi-Fi to cellular data connectivity whenever the first one is performing poor.

5. AT&T Wi-Fi Calling Support for Wi-Fi calling via AT&T has been added, although it’s not functional yet. It seems that Apple has played its part. Now, the mobile carrier has to add some tweaks too, until iPhone users will be able to dial free calls over the Internet. At the moment, Wi-Fi calls on iPhones can be performed only if you’re a T-Mobile customer.

6. Smart Calendar: The native iOS Calendar app has become smarter. It can now access data from Apple Maps an inquire about locations, traffic conditions. It uses this info to calculate the departure time to an event for you. More, it also syncs with mail and pulls data like flights or restaurant reservations.

7. Text Replacement: If you wish to set up a keyboard Shortcut and don’t seem to find it, don’t panic! Apple has changed its label to Text Replacement. Usage and functionality remains the same.

Fact: We’ll continue to update this list if some other important feature introduced by this iOS 9 Public Beta 3 is discovered. Thank you for your understanding!