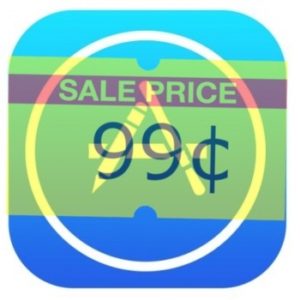 Time for one more update with the latest available App Store Deals! After we’ve all grabbed last week’s education apps that gone free , earning a value of up to $70, today I’m able to share with you 7 iOS games that have been discounted to $0.99, from as high as $5.99.
That’s a discount of up to 83.5%. If you choose to grab the whole 7-game-package you can save up to $25.

Enough with the introduction, let’s check out the list. Make sure that you scroll all the way to the bottom. As usual, a bonus app is available too. Do note, that most deals shared in this article are available for a limited time only. We apologize for the inconvenience in case one or several deals aren’t available anymore, by the time you read this content.

7 Discounted iOS Games
1. INKS ( $0.99) – is a modern Pinball game developed by State of Play Games that combines traditional pinball with tactical challanges. More, as you play you create your own artwork on the canvas. The game comes with 100 unique tables of play. Don’t hesitate to Pinball and Paint and half of the usual price!

2. Chameleon Run ( $0.99) – is an autorunner discounted with 50% by its developers Noodlecake Studios. Run, jump and switch your avatar’s color to match the ground as you advance in the game. Don’t miss the “Double Jump” and “Head Jump” gestures while you compete for the fastest time in each level!

3. Prune ( $0.99) is Apple’s iPad Game of the Year that allows you to shake the stress away while thinking about nature. The game is about three growing while avoiding the common dangers of a world that is growing more and more hostile to nature. The game comes with meditative music to allow you to reach a deep level of relaxation. Joel McDonald, the developer, has discounted the game to $0.99 from $3.99. This offer is for a limited time only!

4. Human Resource Machine ( $0.99) – A great puzzle game that requires you to deliver tasks with the help of little office workers that have to be programed to do the job. Automation is the key of being a good employee. This puzzle game is now discounted 80& for a limited time only!

5. Spider: Rite of the Shrouded Moon ( $0.99) – is an interesting game that offers you the role of a Spider. Players have to spin webs to trap insects. The action takes place in an abandoned mansion. Get info about the history of the Blackbird Estate as you advance in the game. The app mixes with your real life too. Whenever the sun shines, nighttime comes in the game. If it rains outside, so it will in the game providing you with the chance of trapping unique insects. The game is also hugely discounted. Get it at 20% of its original price for an unknown time-frame.

6. LIMBO ( $0.99) This game developed by Playdead is a must have. It’s the winner of more than 100 awards and has a 4,5/5 rating on the App Store. It’s a deadly puzzle game that requires you to lead a boy through dangerous environments and search for his lost sister. Be aware that this game is rated 12+ and labeled as addictive!

7. Dust: An Elysian Tail ( $0.99) – Take control of the fantasy warrior Dust, and live the action as you pass through various landscapes and fight dozens of enemies in a quest for ancient secrets as you aim to discover an ancient civilization. The game is currently hugely discounted. Grab it and save $5.

Bonus: Epic Flail ( FREE) is a 2D fighting game that blends gladiator fighting scenes within the arena with the Japanese anime theme. Try to defeat legendary gladiators and even the gods. The game is now free, for a limited time only! Have fun!