All 35 Changes Coming Along iOS 10.2 To Your iPhone And iPad 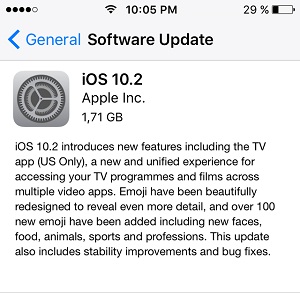 As predicted in our review of the 7th Beta for the iOS 10.2 developer testing program, the public launch of this second major iOS 10 update has been rolled out on December 12, two months after the release of the 10th iPhone Operating System iteration. The way we anticipated, iOS 10.2 brings no less than 35 updates, features and changes to its predecessor iOS 10.1.1. The most recent iPhone and iPad OS is available for download OTA (over-the-air).

We’ve tested out the official version and label it as safe to install. To update to iOS 10.2 grab your Apple smartphone or tablet, open the Settings app and browse for General -> Software Update. Allow your device to inquire for the latest OS version. After you’re prompted with the iOS 10.2 update screen, tap on Download & Install. If you don’t have close to 2GB free storage space available, don’t panic. iOS know hows to temporary make room by deleting and reinstalling apps after the update is finished.

iOS 10.2 Full Update Log
The keynote for this latest iPhone & iPad OS version highlights the new TV app (currently available only for US users), the new and redesigned Emojis as well as advertises stability fixes and performance improvements. However, there are many more changes that are worth mentioning. Some of them have been already presented during the long beta testing phase, while others are yet to be discovered. Here is a list with all of them:
A. TV app
1. Up Next: brings up the movies and shows that you’re currently watching and allows you to resume from where you left off.
2. Watch Now: provides recommendations for new films and TV programmes.
3. Store: iTunes releases and new apps are featured here.
4. Library: shows a collection of your iTunes purchases and rentals.

B. Emoji
5. Redesign: support for Unicode 9.0 comes with redesigned emojis, making the new icons more vivid.
6. New Additions: a lot of 100 new emojis have been added in iOS 10.2 in categories that include faces, food, animals, sports and professions.

C. Photos
7. Live Photos: focus improved with the help of a better stabilization which also delivers a faster frame rate.
8. Grouping Accuracy: for photos representing the same person has been improved.
9. Memories Fix: a bug that was including memories from photos representing screenshots, receipts or other similar screens has been patched.
10. Camera Zoom Fix: iPhone 7 Plus terminals would remain zoomed in after switching back to Camera mode from Camera Roll. This has been corrected.
11. RAW Support: for digital cameras.

D. Messages
12. New Full-Screen Effects: Send with Celebration and Love are the two new animations available for this beloved iOS 10 feature.
13. Keyboard Display: A bug sometimes prevented the keyboard from showing up in Messages. This has been patched.

E. Music
14. Swipe Up: the Now Playing view to quickly access functions like Shuffle, Repeat and Up Next.
15. Sorting: in Library you can now choose how you want to sort Playlists, Albums, and Songs.

F. News
16. Saved Section: a new category that stores all stories that you save for later reading.
17. Paid Stories Section: the best paid articles published by channels that you subscribe to are featured in this new category.
18. Next Story: is much more accessible. Swipe left or tap the Next Story label.

G. Mail
19. Move sheet fix: for situations when the Move sheet was persisting even after the user would fill a Mail message.
20. Copy/Paste Issue: that prevented the option from activating when long pressing in Mail has been solved.
21. Deleting Mail Error: that caused the selection of a wrong message after deleting a Mail in conversation has been fixed.

I. Other Changes
27. HomeKit Notification Support: for accessories that include window coverings, occupancy, motion, door/window, carbon monoxide and water leak sensors.
28. HomeKit Accessories Software Update: come with notifications when available.
29. Bluetooth Improvements: in terms of performance and connectivity with third party accessories.
30. FaceTime Focus fix: for participants during the built-in iOS video calls.
31. FaceTime patch: for wrong orientation or incorrect aspect ratio while engaging in a video call.
32. Visual Voicemail fix: for the issue that prevented a visual voicemail from completing playback.
33. Safari Reader bug: that caused articles to open as empty pages has been patched.
34. Safari crashes: for items marked as read in Reading List has been solved.
35. Weather temperatures: negative values are now correctly displayed with the “minus” symbol before the value.