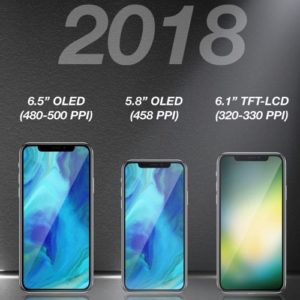 Although we’re not even 2 weeks into the release of the iPhone X, rumors about Apple’s 2018 iPhone lineup start surfacing. Perhaps the most reliable and early predictor of upcoming iOS products is Ming-Chi Kuo an analyst working for the Taiwanese brokerage company from KGI Securities. His research notes are based on information gathered from Apple’s supply chain and they hint that Apple is planning to release three edge-to-edge display iPhone models with similar form factor, but varying in size and display types.

According to this respected analyst all 2018 iPhone models will feature the already popular notch, thus embrace the edge-to-edge display. Touch ID is expected to completely disappear as Face ID will remain the main iOS authentication method for iOS. Check out the render shared nearby and see how the 2018 iPhones are expected to look like. We’re talking about two OLED display terminal and an LCD one.

The Predicted 2018 Apple iPhone Lineup
1. iPhone X Plus
We’ve already shown you a few renders that anticipate how the iPhone X Plus might look like and the above mentioned research notes confirm the expectations of a 6.5-inch OLED display iPhone, that will most probably be an oversized version of the iPhone ‘Ten’. There’s no estimation about the price, but considering that the iPhone X starts from $999, it’s common sense to expect the Plus version to go higher than that.

2. 2nd Generation iPhone X
There will also be an improved version of the iPhone X, a 2nd generation product that will maintain the same design and 5.8-inch OLED display as the 10th anniversary iPhone.

3. 6.1-Inch LCD iPhone
Surprisingly, Apple also plans another big size iPhone a 6.1-inch bezel-less option, that will feature an LCD display though. However, KGI Security renders confirm that Touch ID will be eliminated for this ‘cheaper’ iPhone too. The device will probably cost between $649 and $749 and it will be aimed at the low and mid-range smartphone markets.

What do you think about these predictions? Are you looking for a 6.5-inch display iPhone?