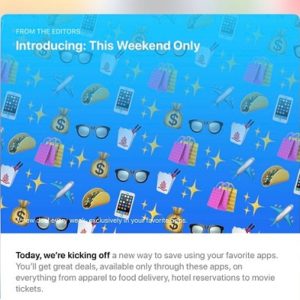 With the release of iOS 11, which includes a completely redesigned App Store, Apple has discontinued its popular Free App of the Week campaign that was featuring a premium app or game gone free, for 7 days, each Thursday. It instead introduced the new App of the Day and Game of the Day sections, which however only promote trending apps without offering any savings. Nevertheless, almost 2 months since the 11th iOS generation premiered, a new App Store promo campaign, labeled ‘This Weekend Only’, has been launched!

The ‘This Weekend Only’ deals aims to help iOS users to save money with the help of featured apps. However, this new promo section isn’t actually providing discounts for the apps themselves, but rather helping you save money by purchasing a service or a product sold by the apps that are featured in the promotion. You’ll find deals for apparel, hotel reservations, food delivery, movie tickets and more. The campaign is updated every Thursday and all deals are available until the next Sunday, this weekend only, as the name of the offer says!

First Apps Featured In App Store’s This Weekend Only
To celebrate the debut of the new ‘This Weekend Only’ campaign, Apple is now featuring five apps with five different savings option. However, starting with next week, a single application will be included in the promo.
1. HotelTonight – Use your iPhone and iPad to book a last minute Hotel room an save up to 40% from the original price!
2. Warby Parker – Order a new pair of glasses or sunglasses via Warby Parker’s app for iOS and receive a free geometric case, which usually retails for $15.
3. Under Armour – Use your iPhone or iPad to purchase athletic apparel from Under Armor and get a $20$ cut for every order over $100.
4. Chipotle – Purchase an entry at Chipotle and receive a free order of chips and queso, this weekend only!
5. Shoptiques – Order accessories and apparel via this iOS app and receive a %15 discount for orders over $100.

Fact: It seems that this new App Store app savings campaign isn’t available worldwide, at least in its early stages. We can confirm that its now active in the United States and will return with an update, if other countries are confirmed too. Do help us with a comment or a mail if App Store’s ‘This Weekend Only’ deals are available in your country too!

Tip: You can still continue to save money when downloading apps on your iPhone and iPad by periodically checking our App Store Deals section for ongoing offers!