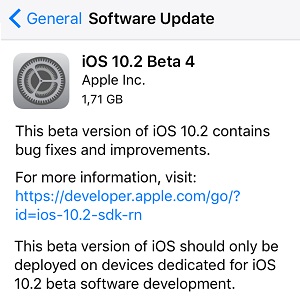 The Cupertino-based tech giant has released the 4th iOS 10.2 Beta for Apple Developers and volunteer testers. This second major update of iOS 10 has begun its testing phase on November 1st and it seems that we’re only days away before the public release. The 10th iOS generation has been seeded mid September along with the iPhone 7. iOS 10.1 came with Portrait Mode and other finishing tweaks in the final part of October.

iOS 10.2 is expected to reach our iPhones and iPads at the beginning of December. There are strong indicators that Beta 4 is the Golden Master version, hinting an imminent public release of this iteration. The OTA update package is around 1.7 GB large, meaning that you install a complete version of iOS and not just a minor add-on. More, featurewise there is nothing visibly new comparing with Beta 3. And the third test version had also only minor changes when compared with the 2nd test version.

Download & Install iOS 10.2 Beta 4
The GM is available for over-the-air update for all iOS device owners that have the iOS 10 Beta Profile installed on their devices. You can grab the Public Beta profile by logging in or signing up with the Apple Beta Software Program.
Once the Profile is installed on your device tap on Settings and browse for General -> Software Update. The iOS 10.2 Beta 4 firmware pops up and you have to hit Download & Install to allow your phone or tablet to grab this latest update.
Tip: I recommend you to perform a full backup before proceeding with the update!