Apple has just seeded the 2nd test version of its upcoming iOS 11 software for iPhone and iPad, exactly 16 days after the release of the first Developer beta. The 11th iOS generation has been presented earlier this month, during the WWDC 2017 keynote and is expected to become publicly available this fall together with the upcoming iPhone 8. iOS 11 is currently only downloadable to Developers, but will soon become available to public testers too, via Apple’s Beta Testing Platform.

We’ve already toyed with the first iOS 11 beta and are currently testing out the 2nd version too. You can also do the same, even if you’re not an Apple Developer, by using this workaround for installing iOS 11 Developer beta 2 on your device. Do mind, that we’re still in the early testing stages and your iPhone or iPad will get the full bugs and lags package along with the impressive new features!

How To Install iOS 11 Developer Beta 2 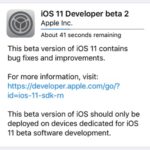 If you already run the initial iOS 11 test version on your iPhone or iPad you can use the over-the-air update system to download the 2nd beta.
1. Open Settings from the Home Screen and browse for General -> Software Update.
2. On the iOS 11 Developer beta 2 software update screen tap on Download and Install.
3. Provide your Passcode and wait until the new software package is downloaded and unpacked on your device. iPhone automatically reboots at the end of the process.
Tip: Don’t forget to perform a full iTunes backup before starting the update process!

Fact: If your iOS device runs iOS 10.3.2 or earlier you have to install the iOS 11 Beta Profile on your device before being able to upgrade OTA. You can do this from your Apple Developer account or from a third party source provided here.

iOS 11 Developer beta 2 Update Log
Apple advertises this 2nd test version as containing bug fixes and performance improvements. We’re currently reviewing the update on our test devices and will update this page in case we detect new features and changes when compared to the initial version.
Among the most important additions coming with the 11th iOS generation that have already been reviewed by us I remind you:
– New configurable Control Center that reverts to a single panel display.
– Redesigned App Store for easier apps and games discovery.
– Easy to use Screen record function available in Control Center.
– Apple Pay person-to-person money transfer option within Messages.
– QR Code scanning properties for the stock Camera app.
– Do Not Disturb while driving feature to prevent car accidents.
– Command to Siri by typing when voice interaction isn’t possible with the help of the Type to Siri feature.
– Ask your virtual assistant to translate and speak out phrases for you in 5 different languages.
– One-handed keyboard for iPhone 6 and newer terminals.
– Redesigned app drawer in Messages that displays by default at the bottom of each conversation thread.
– New Echo and Spotlight full-screen effects in Messages.
– Select and move multiple apps on iPhone and iPad Home screen.
– Additional AirPods functionality that permits music track changing with double-taps on individual earbuds.
– The Automatic Setup feature that enhances a streamlined upgrade process between old and new iPhone or iPad.

Fact: There are many other changes and new features coming in iOS 11 which are reviewed daily by us and shared here.