Apple Sells iPhone 12 With EarPods In The Box In France 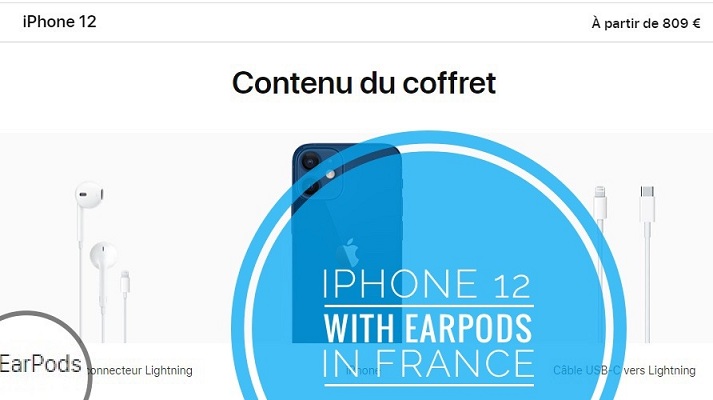 iPhone 12 sold with EarPods in France

Apple removed the wall charger and the classic EarPods from the iPhone 12 packaging. More, any iPhone from the current 2020 lineup (11, SE 2, XR) is shipped in a thinner, smaller box that doesn’t include the above mentioned accessories.

iPhone 12 With EarPods In France

France, makes an exception though! Apple is forced to continue to include the wired EarPods in the box with every iPhone sold! A French law is protecting children against the potential side effects caused by electromagnetic radio frequency exposure.

The French government aims to protects kids under the age of 14, from potential risks caused by smartphone RF exposure and is thus forcing smartphone providers to include wired headphones in the package. That’s because French regulation claims that there are not enough scientific studies about how cell phone radiation affects developing brains.
Fact: Any Company that fails to comply are risking huge fines!

Apple isn’t cutting its profits in France. Having to include the EarPods in the box leads to a price increase for iPhone 12 models in France by 20 EUR, when comparing iPhone 12 prices in France and Germany. The iPhone 12 start for 779 EUR in Germany, while you can pre-order it for 809 EUR in France.

This proves once again that Apple has increased the price of the iPhone 12 lineup in 2020. Although during the keynote the iPhone 12 lineup has been marketed to be sold for the same price as last year’s iPhone 11. However, adding the $38 current retail value of the missing EarPods and power adapter, results in a price increase ranging from of 3 – 5% depending on the chosen model.

Apple is currently encouraging worldwide customers to use their existing Apple chargers and headphones. Customers that are purchasing an iPhone for the first time can buy the 20W USB-C charger for a discounted $19. USB-C to Lightning EarPods have been also discounted to the same price!

Are you using your iPhone with a headset when in a phone call? Let us know, using the comments section available below.

Related: Check out these 13 tricks to lower iPhone radiation exposure.