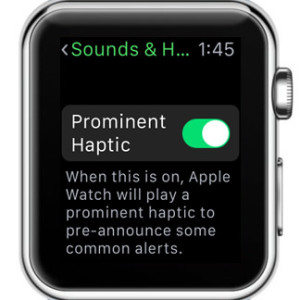 The Watch OS device is equipped with a revolutionary taptic engine that generates the small vibrations felt, on the wearer’s wrist, whenever a new notification lands in, or anytime when an alert is triggered on the Apple Watch and the device isn’t muted. Depending on your own experience, with the wrist-worn gadget, you can tweak the Haptic Strength and even use a bonus feature called Prominent Haptic, to make sure that you feel those gentle vibrations.

First of all, you really need to properly set up the Watch’s wristband fit. Apple recommends, for the best experience, that the back of the Watch case permanently touches your skin. Their actual term is “snug but comfortable fit”. This means that the strap has to be tight enough on your hand, so that the Watch doesn’t pronate, when you flick your wrist. On the other side, it has to be loose enough, to ensure a comfortable wear. A too loose fit will also significantly decrease the haptic effects.

How To Adjust Haptic Strength 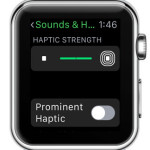 The smartwatch can be set to vibrate at two different intensity levels. The setting can be tweaked directly from your wrist or via the Apple Watch app on the paired iPhone.
– Flick your wrist to wake the display and press the Digital Crown to access the app bundle. Tap on Settings and scroll for Sounds & Haptics. Adjust Haptic Strength by pressing the two buttons next to the haptic level. The left one decreases intensity, while the right one increases it.
– Grab your smartphone and open the Apple Watch app. Open My Watch -> Sounds & Haptics and use the same commands to tweak the Haptic Strength. 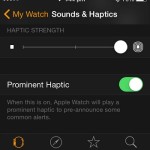 If you’re the type of person that prefers a rather loose fit, it could sometimes happen that you might not feel the haptic alerts, even if you set the vibration intensity to maximum level. This is when you should use the Prominent Haptic function. It practically ads an additional haptic, that has a role to introduce the actual vibration of the incoming notification or alert.
It can be enabled or disabled from the same menu branch on the Apple Watch app on the paired iOS device, or directly from the wrist. Switching Prominent Haptic on from the wearable is only available with the Watch OS 1.0.1 version. From the Sounds & Haptics menu, scroll down and tap the knob nearby the feature in question.

Fact: Common alerts on the Apple Watch have different vibration patterns. For example, a Message notification is highlighted by a single vibration, while the “Time to Stand” alert generates two gentle taps. This way you can recognize an alert without checking the display. However, with Prominent Haptic ON, discerning vibration becomes a little difficult.