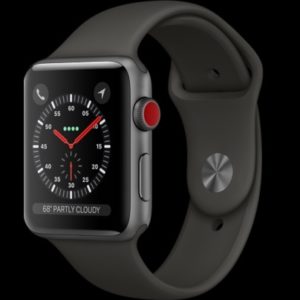 We’re less than 24 hours away from the highly expected 10th iPhone anniversary keynote. Besides the over-speculated three iOS smartphones that will be unveiled at the Steve Jobs Theater, iPhone X, iPhone 8 and iPhone 8 Plus, the Cupertino-based tech company also aims to present the next Apple Watch generation, labeled as Series 3. The recently leaked iOS 11 GM provides hints about a smartwatch that comes with standalone cellular connectivity, which means that you will be able to engage in calls even when the paired iPhone isn’t around.

The Apple Watch Series 2, unveiled in 2016, include a built-in GPS for Apple’s wrist-worn gadget, making the watchOS device a little less depended on the paired iPhone. With the LTE chip featured in the 3rd generation, the Apple Watch becomes fully standalone. Check out the print-screen of the Series 3, iOS 11 pairing screen uploaded nearby. Notice the cellular signal indicator available as a complication in the center of the Watch Face, as well as a red Digital Crown.

The Apple Watch 3 form factor is quite identical with the one of its predecessors, but internals are rumored to receive an upgrade including an upgraded processor, the LTE chip as well as an improved battery life. Code inside the iOS 11 GM hints that the new Apple Watch will be able to share a phone number with the paired iPhone and receive or dial calls. A new watchOS 4 functionality prepares this feature by allowing users to dial any number from the Apple Watch!

Fact: We also expect increased waterproofing capabilities for the Apple Watch Series 3. Stay tuned during the September 12 keynote and find out all the new features coming in watchOS 4.