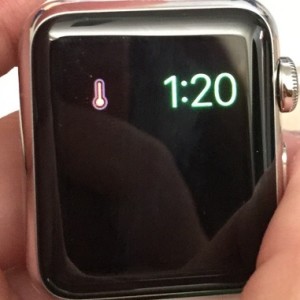 If an iPhone can be described as a mini-computer, the Apple Watch surly is a micro-gadget. As with any piece of technology, both gadgets come with optimal temperature operating ranges. If the regular desktop computers are equipped with fans, which cool them down when they overheat, the mobile devices don’t afford the luxury of storing and powering a ventilator. This is why Apple has coded iOS and watchOS with temperature warning alerts and automatic shutdown features!

The Cupertino-based manufacturer informs that both its revolutionary devices are designed to provide optimal performances within ambient temperature values of 32° to 95° F (0° and 35° C). This range extends when it comes to storing the devices. In power-OFF status, iPhones and Apple Watches can be deposited at room temperatures between -4° and 113° F (-20° and 45° C).

This means that you can harm the battery and other components if you forget your Apple Watch exposed to direct sunlight, leave it in a sauna or hot car for a prolonged period of time. Similar to the iPhone, the wrist-worn device will display a temperature warning screen when it’s operating outside the optimal values. The Apple Watch automatically enters in Power Reserve mode and displays a thermometer icon. If the thermometer bar is filled it means that the Watch is overheated, else you must have used it in freezing conditions!

How To Manage Apple Watch Temperature
1. Overheating
If the Watch is displaying the overheating alert screen and you are wearing it, remove it from your wrist immediately and place it in a cool spot. Yes, it’s water resistant, but don’t throw it in a cool liquid because drastic temperature changes are not recommended either! Let it cool down naturally instead. Check it with your fingers. When ready press simultaneously the digital crown and the side button to perform a force reboot.

2. Freezing
If you exposed your Watch to the blizzard, you might wanna take it off from your wrist and store it within an inside pocket of your coat until you reach shelter. When you’ve escaped the freezing conditions you can snap the Watch back on your wrist and let your body temperature bring it back to life. You most probably have to restart it, when you consider that it has returned to normal operating temperatures.

Fact: The Apple Watch, together with watchOS, has also a few self-protection mechanism, to counterattack overheating, which include: dimming the display, pausing data transfers, suspending charging, closing unnecessary apps and so on.