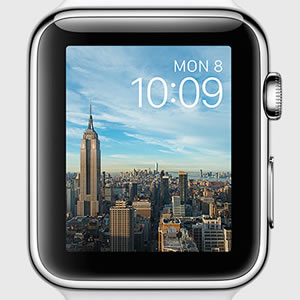 Starting with watchOS 2 Apple introduces a series of new Watch Faces, to your wrist-worn device. The launch version includes 10 Watch backgrounds, which come with specific customization option. Some like Modular, Utility, Simple, Color, Chronograph and Mickey can host several app complications, while others are less tweak-able like Motion and X-Large. The rest are non-customizable. I’m talking about Astronomy, Solar.

The second version of watchOS introduces three more Watch Face types. They’re called TimeLapse, Photo Album and Still Photo. Each of them has the role to place a familiar background on your Apple Watch Face. The TimeLapse background displays a 24-hour looping animation on your Watch Face. The theme is tweakable and can be a famous city or a beautiful location. Practically the speed-up frames, unfolding on your wearables screen, display a popular view from the selected city, according to the actual time. If it’s night you can admire the city lights, in the morning you can admire the sunrise and so on.

The first watchOS 2 betas include five animated cities or locations to choose from. You can pick between: Mack Lake, New York, Hong Kong, London and Shanghai. However, we do expect more locations to be added until the public release, confirmed for this fall. For now, if you’re an Apple developer or simply installed the watchOS 2 beta on your personal device, in order to toy with the novelties, you have to manage with the above mention 24-hour loops. Mack Lake is a great choice if you love nature, while the other four popular cities display iconic metropolis views. The New York time-lapse frames a shot of the Manhattan along with the Empire State building, London Bridge and Big Ben are looped from England’s capital and so on.

How To Add and Customize Time-Lapse Watch Faces 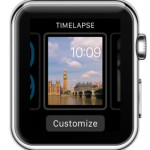 You can find the Timelapse background on the Watch Face selector menu, next to the traditional wallpapers. The loops are right after the X-Large Watch Face, the last one displayed when you swipe left. Tap the “Customize” button available below the Watch Face type. Next, turn the Digital Crown to browse between locations. When you land on the one you wish to pick, tap on it and your new Watch Face is selected. Now, every time when you flick your wrist you’ll see a view of your favorite city captured at that current time. If you continue to watch, the timelapse plays and you can see the entire 24-hour loop starting from the present moment.
Fact: Timelapse Watch Faces can’t accommodate app complications!

Self-Recorded Time-Lapse Watch Faces
We do expect that Apple, will allow users to capture their own time-lapses, with the help of the paired iPhone. As you already know, starting with iOS 8, your smartphone’s stock Camera app includes a Time-Lapse function which captures and easily creates loops. The only impediment to use them on the Apple Watch is their size. So, if a re-size tool can be coded, to crop the videos to Watch Face-like dimensions, problem would be easily solved and TimeLapse Watch Faces would become even more customizable.