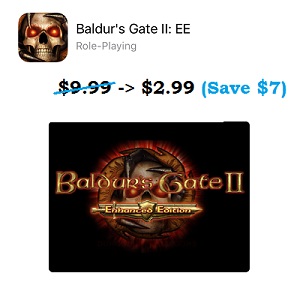 Overhaul Games have recently discounted their flaghsip iOS game Baldur’s Gate II: EE! The addictive role playing game usually retails for $9.99 in the App Store and has seen several other price reductions to $4.99 throughout the past few months. But this time the app is available for $2.99. This is the lowest price we’ve ever seen the game sell for. Save $7 from the regular price! Be aware that this sale is available for a limited time only.

Baldur’s Gate II: EE is the continuation of the BG Enhanced Edition. The game includes the original 60-hour long Shadows of Amn campaign along three new campaigns entitled: Throne of Bhaal, Fist of the Fallen and The Black Pits II: The Gladiators of Thay. If you want more you can unlock three more playing scenarios by opting for one or all of the three following titles: A Voice in the Dark, In Defense of the Wild and A Price Paid in Blood.

Fact: Although Baldur’s Gate II Enhance Edition is labeled as an universal iOS game and works on both iPhone and iPad, the developers recommends you to run it on the tablet for optimal gaming experience!