Posted in Jailbreaking, News by Patricia on August 4, 2016 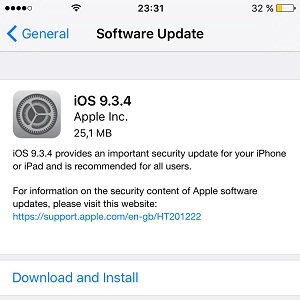 Although we’re in the later stages of the iOS 10 Beta Testing program, Apple has just seeded iOS 9.3.4, a software update that focuses only on a major security issue. According to the release note, a glitch that allowed memory corruption has been patched. The security flaw is the same uncovered by Team Pangu and exploited in their iOS 9.3.3 jailbreak tweak. iOS developers encourage everyone owning and iPhone or iPad to update!

iOS 9.3.4 is now available Over-The-Air (OTA) for everyone that is running and publicly released iOS version and owns an iPhone 4s or later. If your iPhone is powered by iOS 9.3.3, the update package is 25,1 MB small for the iPhone 6s. There are no other updates or fixes excepting the above mentioned security patch. If Apple hurried up to seed this version just to solve one error it must be important and worth upgrading. The flaw was found by Team Pangu after months of digging in the iOS 9 foundation and patched by Apple within 10 days .

Updating is very simple as always. Because this update is really fresh you might not receive a prompt from your iPhone just yet. Visit Settings -> General -> Software Update to allow your iPhone to check for the new firmware. Once found, tap on Download and Install, provide your iPhone or iPad Passcode and Agree with terms.
Be patient until the 9.3.4 firmware is downloaded. Next, tap Install and wait until your iOS device verifies the update. The iPhone will reboot when finished and your device will be more secure!
Tip: If Install is greyed out you need to connect your iPhone to a charger, because the battery percentage might be lower than 50%. 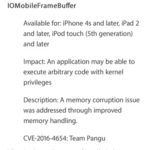 iOS 9.3.4 Release Note
As mentioned above, the update log is really brief. Check the nearby image for a print-screen!