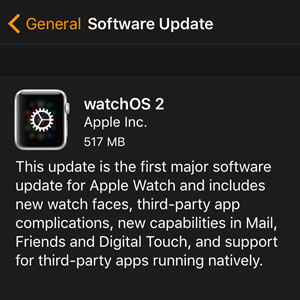 Apple has released the 2nd watchOS generation for its wrist-worn device, after a 5 day delay! The initial launch date, scheduled for September 16, was postponed because of an important bug (official info). However, our sources claim that releasing iOS 9 and watchOS 2 on the same date would have been a marketing error and an unnecessary overload for Apple’s servers!

Anyway, watchOS 2.0 is now available, for download, via the Apple Watch app on the paired iPhone! This is the first major Apple Watch software update and the second ever, after watchOS 1.0.1. It comes about 4 months after the wearable’s release. Upgrade and you can expect more than 13 new features and enhancements, including: new watch faces, third-party app complications, Time Travel, Nightstand mode, improved Mail, Friends and Digital Touch apps and much more. 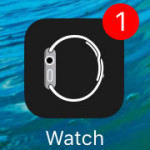 WatchOS 2 Upgrade Requirements
– The size of this update file is 517 MB. So, make sure that you have enough storage available.
– Check that the Apple Watch and its iOS companion are in range and connected via Wi-Fi and Bluetooth.
– The watchOS gadget has to be connected to the MagSafe charger.
– The Apple Watch battery needs to be at least 50% charged before the update can begin.

How To Upgrade To watchOS 2 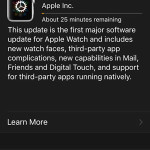 If you own an Apple Watch you shouldn’t hesitate to upgrade it. The amount of new features is overwhelming and definitely worth the 30 minutes, that you need to spend.
Step 1: Grab the paired iPhone and open the Apple Watch app.
Step 2: Browse to the My Watch tab, opt for General and tap on Software Update. The iPhone will inquire Apple’s servers for an available update and watchOS 2 will result as a valid hit.
Step 3: Engage the Download and Install button to start the digital acquisition of the watchOS 2 update package.
Step 4: Provide your iPhone’s Passcode and agree with Apple’s terms to start the download process.
Step 5: Wait until the iOS device completes the download (it can take up to 1 hour). After this, the preparing phase completes. 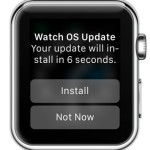 Step 6: Before the installation begins, there is one last step to complete. Verify the upgrade by inputing your Apple Watch passcode, when the wrist gadget sends a message alert tone. Now, you can proceed and press Install to begin the upgrade process on your Apple Watch.

Step 7: Be patient once again until the circle surrounding the Apple logo, displayed on your Watch, fill (twice!). The watchOS gadget restarts and you’re ready to check out the new OS!

This update contains new features and capabilities for users and developers including the following:
New watch faces and timekeeping features
– Time-lapse videos of Hong King, London, Mack Lake, New York, Shanghai and Paris.
– Photo and Photo Album so you can see your favourite images every time you raise your wrist, including support for Live Photos.
– Time Travel with the Digital Crown to see what’s coming in the future or what’s happened in the past
– Nightstand Mode so your Watch can be used as a bedside alarm clock
– 9 new colours to customise your watch face, and a new multicolour Modular face.
– Support for third-party apps to create complications
Siri improvements
– Start a specific workout, get public transport directions or ask to see a glance
– Support for FaceTime audio calling and replying to email
– Support for HomeKit to control support devices in your home using Siri
– New support for Austria, Belgium (French and Dutch) and Norway
Activity and Workout improvements
– Workouts from third-party apps on the Watch can be included in your Activity rings
– Activity rings, workouts and achievements can be shared from the Activity app on iPhone
– Interactive achievements
– On-demand weekly summary
– Mute Activity notifications for one day
– Workouts saved automatically
Apple Pay and Wallet improvements
– Support for Discovery cards
– Support for reward cards and store credit and debit cards
– Add passes to Wallet directly from third-party apps on your Watch
Friends and Digital Touch Improvements
– Add more than 12 Friends directly from Apple Watch
– Multiple Friends’ groups that you can name
– Send sketches using multiple colours
– New options for animated emoji
Maps improvements
– Transport view, showing public transport lines, stations and international connections in selected major cities
– View the list of directions for your current route
– View station placards with departure information
Music improvements
– New Beats 1 buttons to start playing the 24/7 radio station
– New Quick Play button to play a variety of songs from Apple Music
Other Improvements
– Reply to emails using dictation, emoji or smart replies customised specifically for email
– Make and receive calls using FaceTime audio
– Support for Wi-Fi calling without iPhone in proximity on participating carriers
– Activation Lock prevents anyone from activating your Apple Watch without your Apple ID and password
New developer capabilities
– Native SDK to build faster and more powerful apps running natively on Apple Watch
– Access to accelerometer to more granularly track your motion.
– Access to heart rate sensor for use during a workout
– Access to microphone and speaker to record and play audio
– Access to the Taptic Engine with 8 different types of Haptic feedback
– Access to the Digital Crown for more precise controls
– Ability to play video directly on Apple Watch
– Support for running aps without iPhone in proximity, including access to networking capabilities when connected to known Wi-Fi networks
– Complications to the watch face
– Workouts from apps can be counted towards Activity rings
– Workouts from apps can be included in Activity app on iPhone
New support for
– system language in English (India), Finnish, Indonesian, Norwegian and Polish
– dictation in Dutch (Belgium), English (Ireland, Philippines, South Africa), French (Belgium), German (Austria), Spanish (Chile, Colombia)
– smart replies in Traditional Chinese (Hong Kong, Taiwan), Danish, Dutch, English (New Zealand, Singapore), Japanese, Korean, Swedish, Thai.