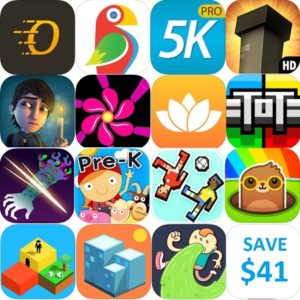 Our weekly collection of paid App Store apps, that have temporary gone free, or are heavily discounted includes 15 apps and games. Grab them all and save up to $41. Choose between Photo & Video, Educational, Health & Fitness, Productivity, Games and many other types of apps compatible with the iPhone, iPad an iPod touch. 5k Trainer Pro also comes with Apple Watch compatibility.

All 15 offers are still available at the time of posting. If you turn up too late, we do apologize for not marketing this article better. Give us a hand to spread the word and share this page to your contacts and social media friends. Inform as many iOS users as possible and allow them to benefit from these promos. Note, that some sales will last longer than others, so maker sure that you check all of them.

15 Apps Gone Free Or Discounted – Week 21
1. Outread – Speed Reading ( -> $0.99) – If you read a lot on your iPhone, iPad or iPod Touch this is a must-have app. It comes with a highlighter feature and the main idea is to split content in small chunks of text to make it reading easier and faster.

2. Brushstroke ( -> FREE) – Transform any CameraRoll photo into a veritable painting, by performing a single touch. Choose between multiple painting styles. Guess what, videos can be converted too!

3. 5k Trainer Pro ( -> FREE) – Get up from your couch and train to be able to run 5 kilometers within 2 months. A workout with many success stories that requires you to practice 30 minutes for 3 days a week, 8 weeks long. Also includes Apple Watch app for comfortable exercise tracking.

4. Little Inferno HD ( -> $0.99) – This iOS game is about burning junk in a fireplace and although this doesn’t sound fascinating, the app is a hit on the App Store, with a huge amount of positive reviews. It entertains both young and old and can bee seen as a satirical takedown of the 21st century consumer society, or perhaps as a reflection to the end of childhood.

5. Weirdwood Manor ( -> FREE) – Harry Potter fans will love this iPhone and iPad gone free. A compelling story, amazing graphics and fun puzzles will fascinate you. Challenge your mind and inspire your creativity!

7. Essence Breathing ( -> FREE) – One of the simplest relaxation app for your iPhone and iPad. Uses the 4-7-8 breathing technique. Grab it now for free in case you’re not a using the native Breathe Apple Watch app.

8. Tank of Tanks – iPad ( -> FREE) – A great local multiplayer game that allows 4 players to battle using a single iPad. The one button controls and one-minute death-matches keep you in permanent alert!

9. Severed ( -> $2.99) – Is an App store game that has been discounted before and included in our 2016 Cyber Monday collection, as well as during last year’s Halloween sale. Now, it’s available again at a promotional price, the lowest so far. Of course, the discount is available for a limited time only!

10. Pre-K Animal Math Preschool Games ( -> FREE) – A great educational app for children aged 5 and under. Let them explore the farm and play entertaining games, solve puzzles that have the role teach math to your little ones. Over 100 quests to complete!

11. Soccer Physics ( -> FREE) – Another local multiplayer game, that can be played on iPhone, iPad or iPod touch. Play one-button control soccer game with your nearby friend and have. Although basic this App Store game can bring lots of fun.

12. Mole Hammers ( -> FREE) – Yet another game that can be played by two players on a single iOS screen. You can also play single player mode against AI. Hit the mole with the hammer to score and win!

13. Blox 3D World Creator ( -> FREE) – A nice game for 6-8 year olds, that stimulates creativity. It requires your children to create worlds by tapping the screen and adding blocks.

15. Eggggg – The Platform Puker ( -> FREE) – The free App of the Week 21 brings crazy vomiting action to your iPhone and iPad. Who would have thought that a game based on the idea of puking could have success. Try it out and convince yourself!