Can You Complete Just 5 Escapes?

It’s time to credit yet another iOS developer for releasing a new and exciting game on the App Store. Just 5 is an addictive puzzler aimed for your iPhone, iPad and iPod Touch! Christian Strang, the owner of Simple Play Studio, has developed this game, that’s very simple to play, but in the same time, quite challenging to complete. If you already enjoyed the popular AA-needle carousel, you’ll be surly happy to give Just 5 a shot!

This tap-game requires you to direct a ball, placed in the center of the screen, towards the outside walls, represented by your display’s edges. The sphere rotates and has an arrow that points to the potential trajectory. You have to tap your iPhone’s screen to launch it. Before that though, precisely anticipate the launch so that the projected path, as well as the movement of the obstacles fit, so that the ball can travel in a straight line and reach the wall, without hitting one of the moving barrier’s that are surrounding it. 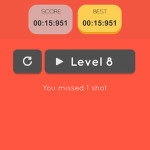 – The ball has to escape the moving spheric-prison five times, in order to complete a level. This means that you have to direct the ball to safety each time, without hitting the rounded barrier. Else, the counter is reset and you have to start from scratch.
– Choose the direction of your sphere by determining the moment of your tap. Use the arrow available in front of the ball to pick the right launch moment.
– Just 5 comes with 50 levels (starting with version 1.11). The game was initially launched with 40 escape missions. Each stage comes with moving enclosures that change direction and motion intensity. Their patterns become harder to predict the more you advance in the game.
– Each time when you complete a level you’re informed about the time you spent unlocking it, as well as how many missed launches you registered.
– A new stage can be played only if you complete the one that precedes it. However, you are able to re-play a level in order to improve your performance.

Just 5 Tips & Tricks
Probably the best advice that will help you increase your success rate when playing this puzzle game is patience. After you complete the initial accommodation levels, you’ll notice that difficulty increases. The fact that you need to trick the enclosure five times without hitting it, eliminates luck from the equation. If you’re not properly using your imagination and memory to anticipate the movement of the obstacles you’ll have a hard time in completing an advanced level.
Fact: For sure that Just 5 will test your reflexes and improve your reaction times!