CarPlay Not Connecting To iPhone After iOS 16 Update? (Fix!) 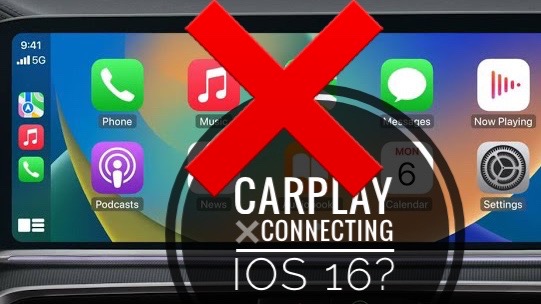 CarPlay not connecting to iPhone after iOS 16 update? CarPlay not working in iOS 16.0.3 either? Apparently, this issue occurs when your device is connected to a VPN and Apple will fix it in iOS 16.1! Here is what to do until then!

This issue has been reported by Sasha:

and confirmed by Calvin:

“carplay still not working after updating to ios 16.0.3. help please!”

How To Fix CarPlay Not Working iOS 16

Apple has acknowledged the issue and has provided a fix in the upcoming iOS 16.1 update which is due on Monday, October 24.

However, if you want to fix it sooner reports show that this issue is most likely caused by the VPN connection on your iPhone.

You could temporary disable the Virtual Private Network until your’re able to install iOS 16.1 on your device:

This is done either from the specific VPN app on your device (i.e. Free VPN, Express VPN, etc.).
or
Open Settings and browse for General -> VPN & Device Management -> VPN.

If you need your VPN connection and can’t wait a couple more days until iOS 16.1 is officialy out you can fix CarPlay by installing the Release Candidate version.

iOS 16.1 RC is currently available over the air, but you have to sign up as an Apple Beta Software Program member to be able to download it. All details are available here.

Have you managed to fix CarPlay not connecting iOS 16 problem? Do you have a better solution or other issues to report? Share your feedback in the comments.

Related: CarPlay randomly disconnects from iPhone in iOS 16? Here is what you can do to fix it.

25 Responses to CarPlay Not Connecting To iPhone After iOS 16 Update? (Fix!)