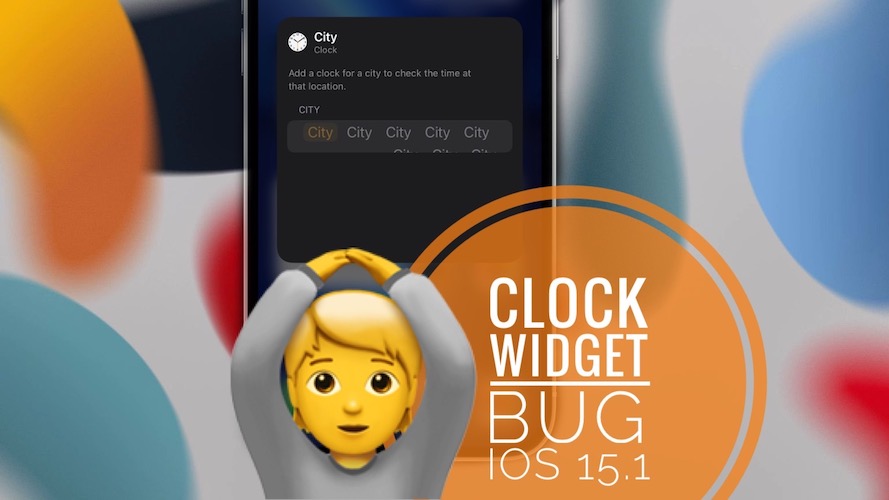 Are you trying to change city in the Clock Widget but a glitch occurs and the glance stops working? This is a new iOS 15.1 bug that popped up during Beta 3. Users get the City City City selection instead of the chosen location. More, the Home Screen widget stops working!

This issues is affecting the City widget as well as the World Clock glances.

Important: The glitch only starts occurring when the users tries to change the city, via the Edit Widget option. As soon as you select a new location, iOS 15 fails to save it, displaying ‘City City City City’ all over the interface.

Fact: If you try to edit the widget you get the ‘Unable to Load’ error!

Tip: If you’ve already configured one or more Clock Widgets on your Home Screen, in the previous iOS versions the cities will be carried over to iOS 15.1 Beta 3 so the widgets will work as long as you don’t try to edit them!

How To Fix Clock Widget Bug

The only way to make the City and World Clock widgets to display time again is by removing and re-adding the widget!

However, you will have to settle with the default cities. Trying to edit them will trigger the same bug and the Clock widget stops showing the time!

Fact: You can try to force restart iPhone, but this doesn’t help in our case! Does it fix the problem for you?

Are you also encountering this clock widget bug? Have you found any way to fix it? Use the comments section and share your feedback.