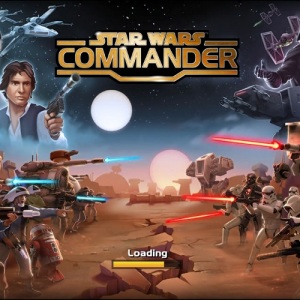 If you’re a fan of Real Time Strategy (RTS) games, you shouldn’t miss out on Star Wars: Commander, by Walt Disney via Lucasfilm. It works flawless on any iPhone or iPad running at least iOS 6.0. What’s more important is that you can use the full features of the game free of charge. This doesn’t mean that this RTS comes without ‘In-app Purchases’, but the Crystals available in exchange of real money are only used to speed-up the action and provide additional resources.

OK, so let’s cut to the chase. After you install Star Wars: Commander from the App Store and watch a short intro, your asked to pick a side. You can either opt to join the Empire forces or fight along with the Rebellion and its heroes. Each side comes with its particular headquarters, buildings, troops and allies. Next, you start to build your base in order to be able to defend incoming attacks and have the capacity to build-up your forces to initiate invasions of enemy territories.

The game exceeds expectations when it comes to graphics, gameplay and even user-friendliness. You don’t have to worry, if this is the first time when you play an RTS the storyline takes you from scratch and teaches you step by step how the game is played, how resources are collected, buildings constructed and units are built. After engaging in your first battles you will also be able to gain knowledge, experience and be able to develop efficient defensive and offensive strategies. Are you ready for galactic supremacy?

Star Wars: Commander – Gameplay
So, once you start working on your own base, you will focus on harvesting ‘Credits’ and ‘Alloy’ to be able to construct buildings and train troops. 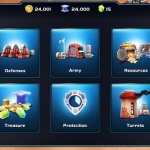 A. Defense: After 2 days, or sooner if you decide to attack an online rival, your base will become exposed to enemy incursions. It’s very important how you place your defensive turrets, walls and buildings in order to maximize defense efficiency. If your defense holds you win medals and gain a higher ranking among the Empire or Rebellion forces. If you lose your medal count decreases and you also cede some of your resources to your attacker. It’s important to know that while defending you don’t have to command your forces, because your turrets engage automatically. This is how the game is played non-stop and you don’t need to be online when you’re attacked. You’ll be able to replay your defensive efforts and see the outcome whenever you resume play. 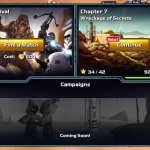 B. Attack: As anticipated attacking is much more dynamic. No matter which of the three offensive options you pick, do mind that your base needs to have troops trained and ready for battle before being able to attack. Also note that during an attack you only need to deploy your troops in strategic locations. They are trained to automatically engage an enemy when deployed. Here are the three main attacking gameplay modes:
1. Chapters: You can continue the storyline and accomplish missions, which offer you the chance to see how new troops perform in battle and receive precious advices from your allies. You are awarded with resources for every completed mission.
2. Campaigns: are available from time to time and their reward is the unlocking of new troops.
3. Attack a Rival: the most engaging offensive feature, allows you to attack another online player, destroy his base, capture his resources and win ranking medals. You can engage another online Star Wars Commander via the ‘Attack a Rival’ option or by tapping on the ‘Revenge’ command, available in the ‘Battle log’ menu. 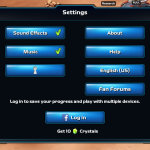 Star Wars: Commander – Settings
Check the nearby image to see how the Settings screen looks like. You have the options to:
– cut sound effects and music in order to save battery;
– change your language if you’re not native English;
– access the ‘Help’ menu, for extra aid;
– log-in with Facebook in order to save your progress and be able to continue playing from another iOS or Android device;
– join the ‘Fan Forums’ to share impressions and read about additional tips that will improve your skills.

Star Wars: Commander – Tips & Tricks
A. Gameplay
1. Upgrade Resources: Always upgrade your ‘Alloy Refineries’ and ‘Credit Markets’ first, in order to have enough resources to upgrade the other buildings. Upgrade ‘Headquarters’ only when all the other buildings of your base have reached the same level.
2. Buy Droid: Have at least 2 ‘Droids’ in order to be able to construct two buildings in the same time. Use some of the initial ‘Crystals’ to buy an extra droid.
3. Hidden Crystals: Use Droids to clean ‘Junk’ and ‘Large Rocks’ from around your base. You’ll find precious crystals.
4. Alliances: Join a ‘Squad’ and receive or donate troops between online players of the same team.
5. Save Battery: Turn off Music and Sound Effects in order to save precious battery life. Audio is nice, but you’ll get used to play without it especially if you do it for a long time. If you wish to bring this one step further, and control the addiction, you can also deny ‘Push Notifications’ from iOS Settings menu. It will save even more battery juice, and you’ll resume play only when you wish, without being stressed by incoming notifications.

B. Defense
1. Headquarter Survival: Position your headquarters in the middle of your base, in order to make the enemy work to reach and destroy it. If your headquarters survives a raid, you have very high chances of being considered the winner of the clash.
2. Defense-lines: Use walls as first line of defense. You can use non important buildings as second line of defense, followed by turrets. This way you’ll buy precious time for your turrets to hit the invader until the enemy is able to hit your turrets.
3. Variation: Mix turrets because each is efficient against a specific range of enemy units.
4. Immunity: Upgrade turrets preferably when you have protection. This means that no one will be able to invade you until the protection expires, or until you decide to attack and lose your immunity. If a turret is upgrading, it will be off-line and won’t contribute to your base’s defensive efforts.
5. Double Wall-line: Build a two-layer fortified wall around your turrets and headquarters, when your base level allows it.

C. Attack
1. Diversify Troops: Build units that are efficient against turrets. Generalists should never miss from your squadron.
2. Strategy: Study your opponents base before deploying troops. Notice how his defense is set up. Always, deploy units that are expert in destroying turrets. Notice which are of the base has a lower turret density and deploy all anti-turret units. They’ll march and attack turrets and no other buildings. Once defense is cleared send your generalists asap to capture resources and destroy the other buildings left behind.
3. Heroes: are additional forces that are crucial for completing a successful attack. Don’t forget to get them aboard.
4. Revenge: only ask for a revenge after you check the replay of your defense and consider that the units of your attacker are under your level. This means that your revenge has high chances of success.
5. Timing: plan a new attack only a few minutes before your protection expires. This way you gain extra time to organize your base.