Did You Notice The Hidden iPhone 6S Trackpad Trick? 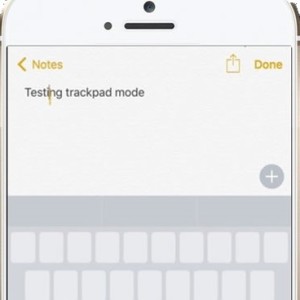 Editing typos and witting long segments of text, on your iPhone, has just become a lot easier! The release of iOS 9 combined with the revolutionary 3D Touch technology, available with the latest Apple flagships, allows a series of gesture shortcuts and action commands that increase ones efficiency, while using the iPhone 6S and 6S Plus devices. We’ve already introduced you to the hidden 3D Touch App Switcher shortcut and the Quick Replies Force Touch combo. This time, I show you how to rapidly edit text, when using the native iOS Keyboard.

If you press firmly on your smartphone’s screen, while the built-in keyboard is enabled, you’ll transform the cursor in a trackpad, which you can then drag along the screen, towards the desired position. This way you can rapidly edit texts, correct typos or highlight paragraphs. Yes, you can also select words or larger chunks of text, if you go even deeper with your press. It’s the same double depth gesture, performed when using the Peek and Pop feature.

1. How To Use
As described above, the trackpad can be enabled whenever the iOS keyboard slides in, while composing a Message, replying to an email, typing web address in Safari, writing a note or any other action that triggers the native keyboard. Press firmly anywhere on the iPhone 6S or 6S Plus screen (inside the keyboard) and the cursor automatically becomes a trackpad. Maintain your press and start sliding your finger along the screen. Notice how the trackpad follows your gesture. Bring it in the desired position and release the hold. Now you can use the backspace to delete letters, input new ones or perform whatever text editing actions needed.

2. Effects
Whenever the cursor morphs into a trackpad, the keyboard keys are blanked out and turn to gray. Start dragging your finger and reach the part of text that you want to tweak. Immediately after you release the firm press, the keyboard returns to its normal design, allowing you to input new commands. 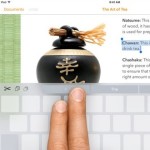 iOS 9 running on an iPad has the ability to create a similar effect on the keyboard cursor. The only difference is that the pointer isn’t converted to a trackpad via 3D Touch, but by placing two fingers simultaneously anywhere on the keyboard area. Hold the tap and drag your fingers along the display to maneuver the trackpad.