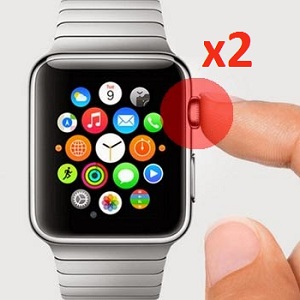 In case you’re wondering if the Apple Watch comes with an App Switcher menu, as the iPhone does, I have to inform you that this feature hasn’t been included within the inaugural watch OS version. This means that we have to use other commands and tricks in order to close apps, reach favorite contacts or switch between apps.

The only way to completely close an application on your wrist gadget is by using the Side button press and release trick. Some consider it a force closing method, but from my point of view it’s the only way to prevent an app to remain running in the background. On the iPhone, this is achieved by opening App Switcher and sliding the unnecessary apps upwards!

The Favorites have a dedicated button on the Apple Watch. It’s the Side Button, also known as the Friends button, because of its main function. Press it once, at any moment, to open the 12-slot position carousel view. The fastest way to reach your preferred contacts on your iOS device, is by double pressing the home button, to open the App Switcher view.

Apple Watch Multitasking Trick
What about the third and one of the most handy features that allows rapid switching between apps, you might ask? On iPhone, you open the App Switcher menu and swipe left or right to browse between the opened apps. Tap on the one you wish to return to and this is how multitasking works on your smartphone. Can you do the same with your wrist gadget? As mentioned above, watch OS doesn’t come with an iPhone-like App Switcher menu, at this moment. However, there is an action shortcut that allows you to return to the most recent used application!

Double click Digital Crown to multitask on Apple Watch! This trick works on every screen of your wrist gadget, as long as the display is On. For example, let’s say that you recently browsed Photos on your smartwatch and you wish to return to the last picture, to show it to someone else that just arrived. Flick your wrist to light up your device’s screen and double tap the Digital Crown. This command also works the other way around, if you’re currently browsing Mail for example, and wish to return to Watch Face, the previous app that you used! 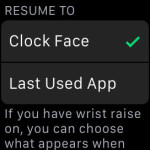 You can also set up your Watch to return to the last used app, when waking it up, without needing to use the multitasking command. Flick your wrist, press the Digital Crown to open the app home screen and browse to Settings -> General -> Activate on Wrist Raise. The feature has to be enabled. Next, scroll down and tweak the Resume To setting, from the default Watch Face selection, to the Last Used App option. Now, every time you flick your wrist and light up your gadget’s display, you’ll be prompted with the last used screen and not the Watch Face. This tweak might prove not too efficient. I would suggest you to stick with the Digital Crown shortcut, for bringing up the last used screen!