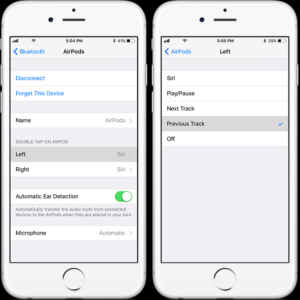 iOS 11 isn’t only bringing improvements to the iPhone, iPad and Apple Watch! It also comes with new features for Apple’s revolutionary wireless earbuds. Although the AirPods have scored an astonishing 98% satisfaction rate among users, some complained that the gadget’s firmware isn’t providing a gesture shortcut, that allows easy switching between music tracks.

In iOS 10 changing tracks directly from the AirPods, without grabbing the iPhone from your pocket, is available only with the help of the virtual assistant. A double-tap on either the Left or Right AirPod would wake Siri up. A voice command is then required to switch the track. However, this was a far fetched action especially when in public. Most of us had to opt for the classic solution, grab the iPhone and switch to the previous or next song manually.

How To Change Tracks From AirPods In iOS 11
During our iOS 11 Beta testing we’ve noticed that the Bluetooth AirPods settings have received a new options for the Double-Tap gesture. More, the functionality has been differentiated and you can assign different function for each AirPod. In iOS 10, double tapping brings up the same action for both earbuds.
1. Grab your iPhone and open Settings from the Home Screen.
2. Choose the Bluetooth menu and tap on the AirPods label.
3. Look for the Double-Tap setting and tap on either the Left or Right option.
4. Next, select the desired action from the available options list: Siri, Play/Pause, Next Track, Previous Track, Off.
5. When you listen to music via AirPods, double-tap them to switch between tracks according to your setup.
Fact: Siri is the default setting for the AirPods double-tap shortcut.

Info: As you might already know, the wireless earbuds are equipped with an accelerometer that recognizes when an AirPod is tapped, thus making the above mentioned gesture shortcuts possible.