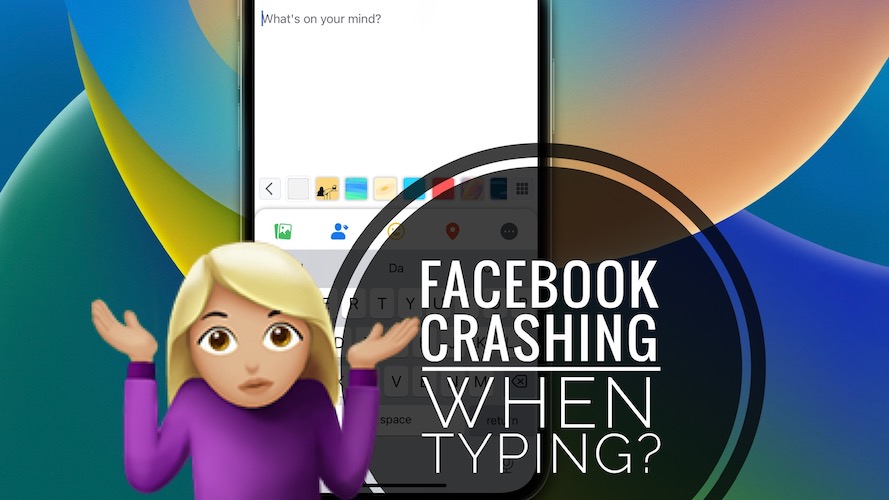 Is Facebook crashing when typing a new post on iPhone? Does this happen after the iOS 16.1.1 update? It’s enough to type a single letter and the app crashes? If you re-open it remembers your draft but crashes again after every additional letter?

This issue has been reported by Sharlene:

“Updated to 16.1.1 on iPhone 13 max pro. I am unable to post on Facebook. Just typing in one letter and FB crashes. When I open it back up, it comes up with the post I was trying to create, but keeps crashing with every keystroke.”

This FB problem has been also confirmed by Bill for an iPhone SE.

We couldn’t replicate this unexpected behavior on our own devices and haven’t found any other similar complaints online!

Are you experiencing it too? Don’t hesitate to share it in the comments along with any useful info that could help us submit a documented feedback report.

Unfortunately, neither does offloading the app and reinstalling it shortly after! Confirmed by Sharelne.

Tip: However, you can still try this troubleshooting option, as the issue doesn’t seem to have a clear fix:
Settings -> General -> iPhone Storage -> Facebook -> Offload App -> Reinstall App.

It appears that Meta has released an update that fixes this issue:

Credits: Thanks Gisela, Lisa and Cindy for confirming.

There’s nothing else that we can recommend at the moment, excepting an iOS 16.1.1 clean install. Reinstalling via wire might clear bugs that have been generated by repeated over-the-air updates. Let us know if it helps!

Have you managed to fix Facebook crashing when trying to write a new post? Do you have a better solution or other issues to report? Share your feedback in the comments!

Related: For more iOS 16.1.1 issues and the available workarounds check our extended review.