Facebook Rolls Out Messenger Kids For iOS And Android

Posted in Apps or Games, News by Patricia on December 4, 2017 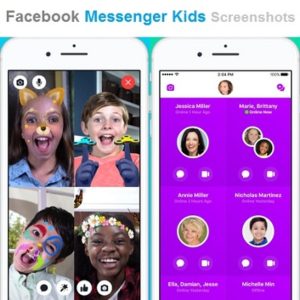 Facebook is now rolling out a new app in the App Store! This time the social media giant, from Menlo Park, is launching a project for children under 13, labeled Messenger Kids. It’s the mini version of Facebook Messenger, that gives parents total control on which Contacts the children can interact with. Facebook sees it as a safe way for kids to instant-message with their friends, while parents can rest assured that no foreigners can lure their kids into trouble.

More, Facebook’s child-friendly Messenger brings the instant-messaging option for kids that don’t own a Facebook account or a phone number. A Messenger Kids account can only be opened by a parent that owns a Facebook account. The adult is also responsible for adding contacts. Children can only delete contacts from the list, but in this case the parent is also notified! For Messenger Kids accounts to pair, each child’s parents have to be friends on Facebook and both sides have to accept the conversation, which provides total control for adults!

Info: Facebook Messenger Kids is already live for iOS users, while Android fans will have to wait a little longer!