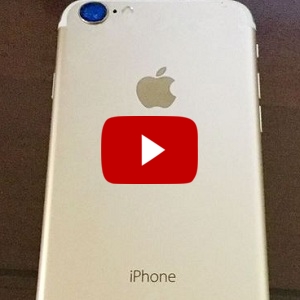 The iPhone 7 release date (presumed September 13) is closing in and the leaks and rumors start heating up. Until now we experienced a series of image leaks with sketches and cases of the upcoming 2016 Apple flagship. However, today a video was “leaked” in China and made public to us by techtastic.nl, shows 6 seconds of footage with a supposed fully assembled iPhone 7. It’s true, the clip only shows the back of the phone and the bottom part of the device. Is this really the next iOS 10 powered iPhone model? Well, most probably No, but the clone in the images is very close to the real thing, design wise at least!

It’s not uncommon for the Chinese market to release clones of the upcoming iPhone models, even before Apple’s actual release date. Based on the credible rumors and leaked sketches that predict the headphone jack dropout, as well as a new extremely bulging back camera. Basically, these are the most important rumored design changes between the iPhone 7 and its predecessor the iPhone 6S.

5 Reasons Why The Video Is Probably Fake
1. It’s quite clear that the design changes between the iPhone 6S and the upcoming iPhone 7 will be minor. So creating a clone for the new model shouldn’t be to difficult.
2. The 6 second footage is strangely short for what seems to be a friendly background, a desk and a second person nearby. It doesn’t seem that the capture was made in a hurry or in spy-mode.
3. The very short footage shows only the back and the bottom of the phone highlighting exactly what people are most interested in. Camera and heaphone jack based on the most recent rumors.
4. The front of the phone isn’t shown, so that could be an easy to manufacture case, based on the old iPhone 6S pattern.
5. The colors are Space Gray and presumably Silver, no new color, which would make the cloning process more expensive.