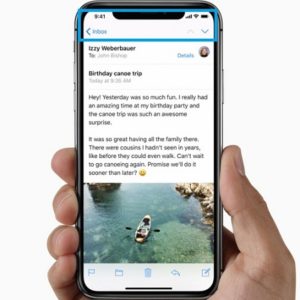 Have you recently upgraded to the iPhone X and are worried that it might have shipped with a hardware failure that causes the top part of the screen to flicker? Well, if this issue occurs only when you open the stock Mail app, you can relax because there is no hardware failure on your device. It’s not a hidden iPhone ‘Ten’ feature either, but most probably another minor iOS 11 glitch.

The Mail screen flickering issue has been reported by a series of users on other iPhone models too ever since the 11th iOS generation has been released. The difference is that older iPhone models the light flashing isn’t that noticeable. The iPhone X’s ears bring extended screen real estate and the instability is easier to detect on the OLED display. We can only hope for this bug to be patches in an upcoming software update. iOS 11.1.1 is expected anytime soon now, because Apple has also promised a quick fix for the native Keyboard autoccorection bug that erroneously replaces the “i” letter with an “A” and a symbol!

How To Fix The iPhone X Mail Flickering
In our iPhone X tests the instability occurs only the first time that you open an email on the Mail app. If you repeat the action afterwards the flickering doesn’t show up anymore as long as the app is available in the background. Every time you force close it or restart your device, you’ll experience the glitch again.
Temporary Fix: To avoid this bug avoid force closing the Mail app, from the App Switcher. Let it linger in the background.

iPhone X Mail Flickering Bug Demoed
Check out the instability demoed in the video available below:

Fact: Follow us and we’ll update you as soon as a software fix is available for this issue. In the meantime you might also be interested in how to troubleshoot of the “Cannot Get Mail” warning prompt that can show up on your iOS device.