Glitch Games, popular iOS and Android app developers, have just informed us that one of their trademark App Store apps has been included in the “App of the Day” promotion. This means that you can grab the concluding episode of the Forever Lost trilogy free of charge. This is one of the most appreciated point-and-click games coded for your iPhone or iPad. Forever Lost: Episode 3 HD has a retail value of $6.99 and can be played as a standalone game.

You don’t have to own the previous episodes to be able to solve the puzzles available in this final act. However, you should also check out the other two chapters because they’re equally awesome. But, first go ahead and download Episode 3 HD, before this sale ends. As a thank you for snatching this offer we ask you to share this page with your friends and contacts to spread the word and allow others to enjoy this App Store app at no cost. 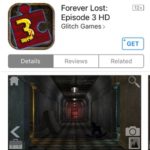 Forever Lost: Episode 3 Facts
Compatibility: iOS 6.0 or later running devices including iPhone, iPad and iPod touch.
Size: 727 MB (If you don’t have enough space on your iPhone check out these 20 tips to free up storage)
Rating: this game is rated 5/5 on App Store (over 180 votes)
Extras: If you like Episode 3 download Episode 1 ($3.99) and Episode 2 ($4.99) to complete your trilogy.

Forever Lost: Episode 3 Gameplay
As mentioned, above this is a first person point-and-click game that requires you to solve various puzzles while following the storyline. You have an in-game camera that allows you to snap photos of clues to help you figure out the solutions more faster, while walking to a multitude of rooms and finding numerous objects.
The high definition visuals and beautiful soundtrack complete the experience.
Fact: The Auto-save function automatically stores your progress and you can resume anytime from where you left.

Tip: Make sure that you also check this week’s free App of the Week.