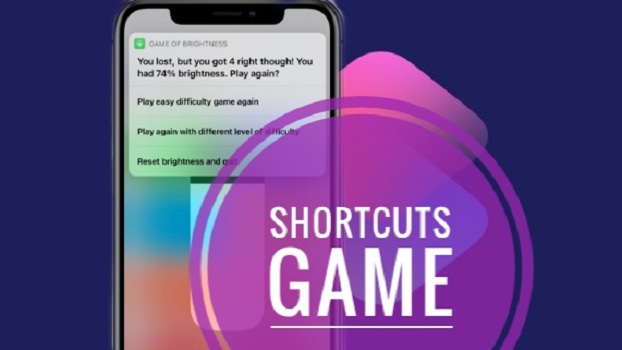 User Dipin476 has recently shared on Reddit, a game that he created with the help of the stock Shortcuts app in iOS 14.

What’s so special about the Game of Brightness? Well, it’s practically a shortcut that runs a game coded with functions available in the Shortcuts app. As soon a you download the shortcut, you’re able to play a simple, but yet enticing game that requires you to set the iPhone brightness level to the percentage indicated by the AI.

The Game of Brightness shows how complex and powerful Shortcuts can be in iOS and iPadOS 14! To play it, you have to download the shortcut, run it in the Shortcuts app, select the difficulty level and open the Control Center. Open the expanded view of the Brightness toggle and have fun!

How To Play Game Of Brightness Shortcuts Game

If you’re accurate enough, you win the round and the classic iOS notification sound is played. The next round starts automatically and you get another Brightness percentage challenge.
If you’re too far off, your prompted with the ‘You lost…’ audio message and the game is over. A banner notification slides down from the top of the screen, informing you how many rounds you won and what brightness level you set in the round that caused you to lose the game.
You’re asked if you want to play again and have three options:

Fact: The more you increase the difficulty level the more accurate you have to be. The Superhard level requires to set brightness to the exact percentage indicated by Siri, while the other levels allow you a certain percentage of deviation. The Easy has a tolerance to error of around 5%.

Game Of Brightness Not Working?

This is the first Shortcuts game that we ever played and found it quite interesting! Do you like the Game Of Brightness? Let us know using the comments section available below.

Related: Here is how to fix Automations in iOS 14!