Gmail pi Update for iPhone 6 and 6 Plus

Posted in Apps or Games, News by Patricia on October 7, 2014 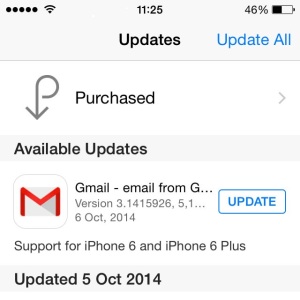 Google have just released an update for the iOS Gmail app. The Upgrade ends up in the headlines not only because it’s now also perfectly tailored for iPhone 6 and iPhone 6 Plus, but also because of theits version number: 3.1415926. Does it ring a bell? Yep, Google have used the famous ‘pi’ constant to denominate their latest Gmail app update. The whole series started on July 24 when they introduced the 3.14159 update, which offered additional Google Drive features.

However, it seems that we need to wait for yet another ‘pi’ update to get highly expected features, besides the support for Apple’s latest flagships. Many fans eagerly await for interactive notifications to become available with Gmail too, since iOS 8 was released. Also, why not hope for the option to have a joint Inbox for all linked Google accounts?

Gmail App ‘pi’ Update Facts
This update was released on October 6 , 2014. The size of it is 5.3 MB. The app is customized for Family Sharing, is rated ‘4+’ on the App Store and requires iOS 7.1 or later. It’s compatible with iPhone, iPad and iPod touch. Google confirms that the app is now optimized for iPhone 5, iPhone 6 and iPhone 6 Plus. It comes with support in 39 languages starting with English and ending with Bokmal, Thai or Vietnamese.

Gmail App for iOS 8 Features
Many Apple users fancy the Gmail app for iPhone and iPad because of the extra features provided, in comparison with the traditional built-in iOS Mail app. Some of the most popular ones are listed below:
– Multiple Accounts: Link up to 5 Gmail accounts and switch easily in-between.
– Instant Notifications: highlighted simultaneously for all linked accounts, in Notification Center, with badge and also on Lock Screen.
– Auto-complete Contacts: the app automatically inserts your contact as you type the recipient.
– Predictive Search: you can query your entire mail and have predictive search available to help you.
– Profile Pictures: are viewable as part of the conversation, so that you can easily identify your email partner. 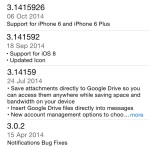