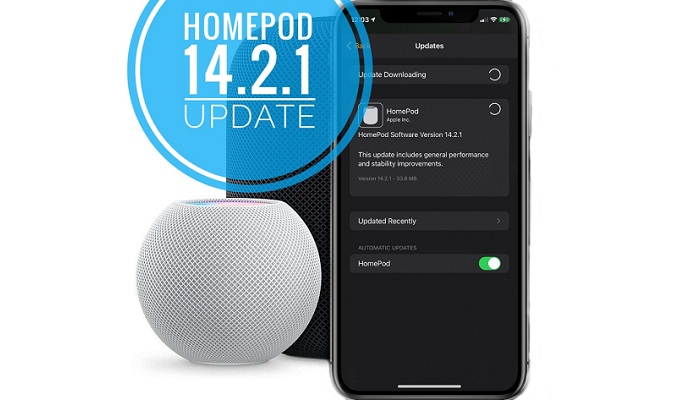 Apple has released audioOS 14.2.1 for HomePod Mini! The HomePod 14.2.1 software update has build number 18K75 and comes just over one month after the release of HomePod 14.2.

Unlike the previous version, that was advertised as adding Intercom and Home Theater features to Apple’s smart speaker, audioOS 14.2.1 is introduced as bringing ‘general performance and stability improvements’.

Apple’s Bluetooth speakers are able to automatically update to the latest software release. However, this can take a bit of time, similar to iPhones that are set to auto update. Here is how to force an update now:

audiOS 14.2 includes a series of bugs like intermittent connectivity between multiple HomePod devices as well as HomePod iPhone connection, volume turning itself down to 65%, grammar mistakes and more. Do you notice any of them getting fixed in software release 14.2.1?
Update: Grammar mistakes haven’t been corrected in HomePod 14.2.1. Siri still uses the singular form of light when she obviously talks about the plural.
Example: ‘Hey Siri, turn off kitchen lights!’ and the answer is: ‘OK, the kitchen light are on!’

Is AudioOS 14.2.1 Available For Both HomePod & HomePod mini?

Yes, this latest release is available for both HomePod and HomePod mini. Can you confirm that this update is also available for your HomePod? Please use the comments section and let us know.
Fact: According to ipsw.me, audioOS 14.2.1 is currently only available for HomePod mini, but the update also shows up for the regular size HomePod.

What’s your feedback about HomePod 14.2.1 software?

Related: iOS 14.2.1 has been released mid-November and is only available for the iPhone 12 range. It’s a rushed update that came to fix a serious iPhone 12 mini touch screen bug as well as a bug that prevented MMS messages from being received.