How To Ask Siri To Send Or Request PayPal Payments

Paypal is the first online payment processors to take advantage of Siri’s expanded third party integration opportunities. Apple allows its virtual assistant a larger range of movement, starting with iOS 10. This permits iOS app developers to include Siri in tasks like sending or requesting money, dispatching messages, dialing VoIP calls, asking for rides, starting workouts and much more. The final gainer of this feature is the iOS user that can perform basic iPhone tasks much easier.

Starting with version 6.7.0 of PayPal for iOS, iPhone users can send money to their Contacts with a simple voice command that sounds like “Hey Siri, send $20 to [Contact Name] with PayPal”. If the friend in question owns a PayPal account you can wire him the cost of the dinner, ticket or any other debt that you may have, without even looking at your iPhone. 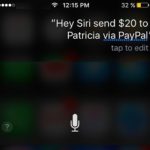 How To Ask Siri To Send PayPal Payment
1. Wake your virtual iOS assistant by pressing & holding your iPhone’s Home screen, or using the Hey Siri voice command.
2. Speak out one of the keyphrases: “Send [money value] to [contact name] via PayPal” or “Request [amount] from [contact name] via PayPal”
3. Review and confirm the payment by speaking out “Yes” or “Send” when Siri comes up with the following dialog box:
“OK. I have your PayPal payment for [amount] to [contact name]. Do you want to send it?” 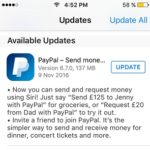 The feature works pretty straight forward, but there are a few aspects that you have to consider:
– Hey Siri feature is available full time only for iPhone 6S owners and newer, else you need your device to be connected to the charger for it to work.
– You can also use an shortened keyphrase form like: “Send $20 to [Contact Name]”, but this will add an extra voice dialog with Siri, because your virtual assistant will ask you first to confirm that you want to perform the transfer via PayPal.
– This Siri voice command feature for PayPal has just been rolled out and is currently available for 30 countries and languages. If the trick doesn’t work yet at your end you might need to wait for the second wave of availability.

Tip: If you don’t own the Paypal app for iOS yet, you can download the latest version from here.