How To Capture, Edit, Save & Share A Screenshot On iPhone 8 And iPhone 8 Plus 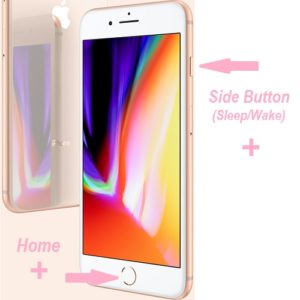 How to screenshot on iPhone 8.

Due to the solid-state Home button and the introduction of the Emergency SOS service some popular button combinations for specific iPhone actions have changed in for the iPhone 8 and its oversized sibling the 8 Plus. Yesterday, I’ve shown you the new hard reset combo for Apple’s 2017 flagships and now I want to draw your attention upon the screenshot procedure.

Surprisingly, there’s no change when it comes to print screening the iPhone 8 and iPhone 8 Plus models. In fact, this is the only button combination that has remained unaltered since it’s introduction. The only change came with the release of the iPhone 6 and the 4.7-inch display iOS devices that saw the Sleep/Power button moved from the top-right corner towards the right side of the device. Button combination remained the same, the only thing that changed was the grip.

How to Screenshot On iPhone 8 & 8 Plus
Capturing the screen of your iPhone is handy when you want to save important info that’s currently displayed, like fitness records, weather info, gaming scores and any other data that you would like to share with friends and contacts over Messages or social media.
How To: Press the Home button followed by an immediate, almost simultaneous, similar action on the Side Button (Sleep/Wake button). It works if you change the order too, as long as each press is normal and in quick successions. You don’t have to press and hold!
Update: Here is how to take a screenshot on the iPhone X!

Fact: The screenshot is confirmed when the display blinks and your iPhone plays a shutter sound. The screen capture immediately turns into a small thumbnail that hovers in the bottom-left corner of the screen, for a few more seconds. Ignore it and it will be automatically saved to the Photos app. Tap it and you’ll open the edit mode.

How To Edit A Screenshot in iOS 11
The easiest way to tweak a print-screen is by tapping its thumbnail immediately after snapping it. Thanks to iOS 11 an edit screen opens up and you can easily crop, markup, magnify or highlight certain parts of the image.
After you finish editing tap Done and you can share your screenshot, save the artwork or delete the capture.

How To View & Share Screenshot in iOS 11
If you don’t share your screen capture from the instant preview menu described above, you can do it later on too. Print screens are saved in the Photos app in a predefined Screenshots folder, available in the Albums tab. Open the desired capture to view it and tap the Share button to send or publish it to your friends and contacts. You can AirDrop the screenshot to another Apple device, attached it in Mail, send it via Messages or publish it on one of your social media accounts.

Tip: You might be also interested in how to record the screen of your iPhone in iOS 11!