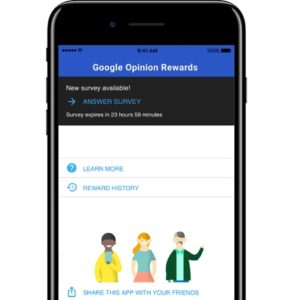 Did you know that you can earn money from Google by tapping on your iPhone for 30 seconds? Yes, the Google Opinion Rewards app has just been added to the App Store and you can install it for free on your iPhone and iPad. All that you have to do to earn a few extra bucks is to respond to quick surveys issued by the Californian-based Internet giant. Your earnings are paid to the PayPal account that you link with the app.

Each completed survey can bring you up to 1 buck and most of them can be completed in less than a minute. More, you don’t have to waste time and check for new surveys, because whenever a new one is available the Google Opinion Rewards app issues a notification on your iOS device. If you don’t have time you can easily skip a survey that you don’t want to answer. There are no strings attached!

Install Google Opinion Rewards On iPhone / iPad
Tap this official App Store download link and grab this moneymaking app from Google. Hit GET followed by INSTALL and allow your iOS device to deploy the app on your device. Hit OPEN when it becomes available to launch the software.
Next, configure your PayPal account and stay alert for upcoming surveys.
Fact: According to Google, the Google Opinion Rewards has already a history on the Google Play Store were over 10 million Android users have downloaded it. 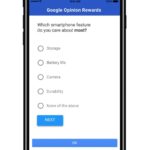 How To Earn Money With Google Surveys
Whenever you receive a new survey notification, tap it and the Google Opinion Awards app is launched. Complete the questionnaire by checking the appropriate question and your USD balance will be adjusted accordingly. Surveys are up to 10 questions long. Cash out to your PayPal account when the minimum threshold is met.
Fact: The positive fact for Apple fans is that Google can’t reward your money into Google Play Store, because you’re not part from the Android ecosystem, which means that you can get the money transferred to your PayPal account and use it in real life. 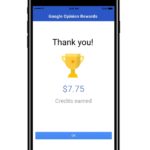 Be Honest Not Greedy
Google surveys often ask opinions about places and business. Be honest and answer only if you used a service or visited the location in question. You’ll be tempted to lie and choose to complete dishonest surveys just for that extra cash. However, Google is constantly sending attention check surveys to test if you’re lying or not. If you’re caught for not being honest you will be skipped from receiving any new questionnaires.
Tip: If you’re not sure about a subject, avoid the survey or “Google it” before answering.

Google Opinion Awards iOS App Limitations
For the moment the option to earn extra money by completing Google surveys on your iPhone or iPad is limited to U.S. citizens. If you’re living outside of the United States you won’t be able to download this app from the App Store. If the situation changes in the near future, we’ll update this article.
Tip: There might be a workaround for the geographical barrier. You can subscribe for an iOS VPN service and hide your true identity. Pick an American based server and start surveying. However, there is no guarantee that Google might figure this out and block your account in the long terms.