How To Eject Water From Apple Watch Series 2 Speaker

The 2nd Apple Watch generation comes with a 50m water resistance rating which qualifies it as recommended for pool swimming workouts as well as shallow water activities in the sea or the ocean. However, there still is a single area of the smartwatch that isn’t fully watertight and that’s the speaker. This makes sense because a completely sealed speaker vent would make it impossible for sound to reach our ears.

Don’t imagine that water can flow inside your Watch through the speaker port, but tiny droplets will linger at the vent’s opening creating an audio discomfort, if you use the Watch immediately after immersing it in water. To solve this, Apple has equipped the Apple Watch Series 2 with a Water Eject Mode that uses a series of predefined sounds to blow water away from the speaker’s housing, returning the wearable to its normal acoustic functionality.

How To Use Apple Watch Water Eject Mode 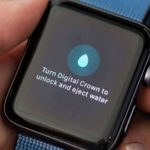 There are currently two ways to flush water from your wearable’s speaker housing.
1. Workouts
If you use the newly introduced Swimming workout to track your in-water fitness activity, you’ll receive a prompt from your watchOS device asking you to eject the water after you complete the session. However, there are numerous other moments when water can reach your speaker without performing a swimming activity. Read on and see how you can us the Water Eject mode whenever you want.

If you swipe up from the Watch Face view you open the Apple Watch Control Center which includes: Battery Percentage Indicator, Airplane Mode Toggle, Silent Mode, Do Not Disturb Mode, Ping iPhone, Lock Apple Watch, Airplay and last but not least Water Eject Mode. This new feature is highlighted by a water droplet icon. Tap it whenever you wish to eject water from the speaker. That’s after you shower, wash your hands or perform any type of action that brings your device in contact with H2O.
Your Apple Watch will display the following message:

Do as indicated and your watchOS device will beep a few times and use sound waves to propel water out of the speaker.

Fact: The Eject Water Mode is currently only available for Apple Watch Series 2. The original Apple Watch as well as the Series aren’t equipped with this feature although they are labeled as Splash proof. It happens to me often to shower with the original Apple Watch and have a distorted Mickey Mouse voice when it speaks out the time immediately after. Why didn’t Apple include the Water Eject feature on these wearables too? Because they don’t want to endorse immersing them too much in water!