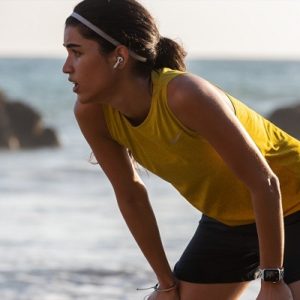 Are your AirPods Pro performing an annoying rattling noise whenever you’re on the move? Unfortunately you aren’t the only one affected by this problem. There are several users that mailed us about this AirPods Pro noise issue. There are many more though that are complaining on Apple’s official support forums. Owners claim that one or both of their AirPods start rattling after a couple of weeks of usage. The issue manifests itself when the user is moving. The more active the more sever the rattling.

AirPods Pro owners plagued by this issue claim that using them at the gym is almost impossible. The rattling doesn’t seem to be caused by Bluetooth or Wi-Fi interference, because the AirPods won’t rattle when the user isn’t moving and start outputting the annoying sound as soon the wearer moves in the same area. It seems that the problem first manifests itself in either the left or the right wireless earbud and after some time the other one gets also “infected”.

How To Confirm AirPods Pro Rattling Sound Problem
1. Rattling While AirPods are Turned Off
Turn of your expensive wireless earbuds and check if the rattling issue is occurring in this state too. If the answer is positive your AirPods are most likely packing a hardware problem.
Fact: Most common cases seem to be reported by users that have bought the AirPods Pro right after the October 20, release date. It’s unclear yet if the hardware issue occurs more often in the first batches manufactured. Remember, that in most cases rattling is reported after several weeks. This can be also an explanation while many cases of early adopters have surfaced first. We will keep an eye on it and see if the same amount of cases will be reported by users that bought the AirPods in the first quarter of 2020. 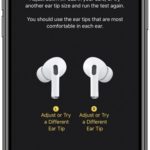 2. AirPods Ear Tip Test
As soon as one or both of your AirPods start rattling, the device will fail the ear tip test. The AirPods ship with three different in-ear tip sizes. This makes them fit perfectly on various ear shapes and sizes. iOS is able to use the AirPods’ microphones and sound output from the drivers. With the help of algorithms it can tell if the current fit is right or whether you need to change the tip size.
Tip: When your AirPods pro start rattling, perform the ear tip test. If the test fails you have another confirmation for the hardware problem.

Fix For AirPods Pro Rattling Sound
Unfortunately there is no do-it-at-home fix for this problem. As mentioned above, all the symptoms lead to the conclusion that some AirPods ship with a hardware failure out of the box. The gadget doesn’t fail from the get go, but the problem surfaces after a few weeks. Users facing this problem have contacted Apple support and most of them have got replacement units to solve the issue. That’s what we advise you to do too. Although the company did not provide an official comment of the situation, Apple seems to be aware of the problem and is replacing the AirPods of affected users without digging too much in to the case.
Fact: We’ve even found cases of users reporting that they’ve got the AirPods Pro replaced for rattling for several times during the space of just a few months.

Are you experiencing the AirPods rattling noise problem? Have you tried to get them replaced by Apple? Share your experience in the comments section available below!

Related: Some iPhone XS units also rattle. Here is a common cause and how you can fix it!