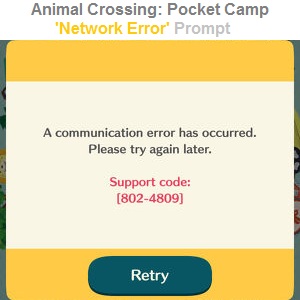 Nintendo has hit the jackpot again and released another blockbuster game for your iPhone and iPad. It’s called Animal Crossing: Pocket Camp (Download link) and is the mobile version of the Animal Crossing franchise. However, success comes for a cost though and the Japanese video game company has had its share of ups and downs, in the past, with Pokemon GO. Nevertheless, it seems that it has partially failed to learn from prior mistakes and Animal Crossing: Pocket Camp is also experiencing network downtime, similar to the one Pokemon GO experienced during its launch.

They aren’t as severe but a couple of hours ago both myself, as well as a couple of readers that mailed us about the problem, have encountered a prompt that signals a network error. The following message is displayed on the iPhone or iPad screen while users play the game: "A communication error has occurred. Please try again later.", with support code [802 – 4809]. This issue is caused by the game’s popularity and the lack of Nintendo’s servers to keep up with the high numbers of players.

How To Fix The Network Error Message 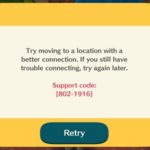 1. Check your Internet
First of all make sure that your iOS device’s Internet connectivity is up an running. Open Safari and load Google.com or browse your favorite social media website. If they work fine, the problem is not at your end.
Tip: If Internet malfunctions on your iPhone or iPad and you’re using Wi-Fi, disconnect it and use your carrier’s data plan. Another troubleshooting trick that you can do is bring your device in Airplane Mode to kill all connectivity for a few seconds. Than use the Control Center again to disable Airplane Mode and reboot your device’s Internet.
Fact: If your iPhone or iPad Internet connection is to blame you should get the support code [802 – 1916] error message exemplified in the screenshot uploaded nearby, with a text stating: "Try moving to a location with a better connection. If you still have trouble connecting, try again later."… which ultimately means that most likely Nintendo’s servers are busy, and there’s nothing wrong with your iPhone.

2. Tap ‘Retry’
If your web connection is fine, there is not much you can do about it, except the usage of the ‘Retry’ button. Whenever you get the ‘Network Error’ message tap on ‘Retry’ to ping Nintendo’s servers one more time and hope for a lucky break. This worked for me every time so far. Will have to observe though if the game has attained its peak user base or if it will continue to grow. Nevertheless, I’m sure that Nintendo has some experience from Pokemon GO and will quickly reconfigure its servers to match the load. 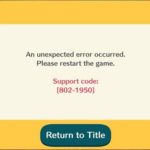 3. Restart The Game
Last but not least you might have to restart the game in case you get the "unexpected error occurred" prompt, with support code [802-1950]. Hit the ‘Return to Title’ option and start over.

Fact: If you get a spinning wheel loading icon in the bottom-right corner of your screen, while playing Animal Crossing: Pocket Camp, you’re also dealing with a networking problem and might soon get the ‘Network Error’ message.

Tip: If the downtime becomes to annoying check out other apps and games that you can kill your time with in our App Store Deals section!