How To Fix iPhone X With Green Lines On The Display 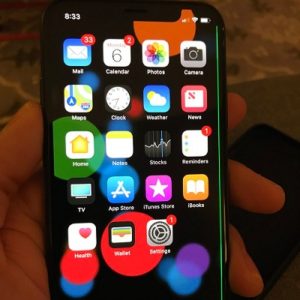 One day after the launch of the iPhone X, we’ve reported an isolated incident of an user that received an iPhone X with a display manufacturing flaw, right out of the box. Of course, that he went to an Apple shop and the unit was replaced for free. Manufacturing flaws are covered by Apple’s standard 1-year AppleCare warranty, that comes with every new purchased unit.

However, today, one week after the release, a couple more iPhone X units, experiencing green lines on their displays, have surfaced. Differently from last week’s blue lines incident, all the units have worked like a charm, when they were delivered and the flaw started occurring in the past few days. The green lines traverse, vertically, the entire OLED display and are mostly situated either on the left or right edge of the screen.

Fixing The iPhone X Green Lines On The Display

If you’re one of the unlucky ones that experiences a green line on the display, you’re most likely dealing with a hardware issue and there is little that you can do yourself to fix. You can attempt to restart your device and see if this fixes the problem. Power off the iPhone X and turn it back on or force restart it. If the green line disappears, remain on guard because it could re-appear a short while later, as reported by one of our readers.

Remember, the iPhone X that experience a mechanical shock and got the Face ID has been disabled prompt because the internals of the TrueDepth camera came out of position? The issue was fixed with a restart, but surfaced back every time when a certain number of faulty unlocks were registered.

Conclusion: All that you can do is bring back your device to the Apple Store or contact Apple’s support staff. Don’t attempt to tear it down yourself, you’ll void the warranty!

Below you can check out a series of units that have been hit by the green line trouble:

Are you among the unlucky ones? Let us know in the comments section available below if you managed to solve the problem!
Update: We’ve got mixed results so far. ‘JJ’ got his phone replaced even months after acquisition, while ‘Hector’was refused a replacement, one day after his warranty expired. What about you?

Related: You might be also interested in how to fix iPhone screen displaying a green tint discoloration after unlocking!