How To Fix Shortcuts Not Working On Home Screen In iOS 14.3 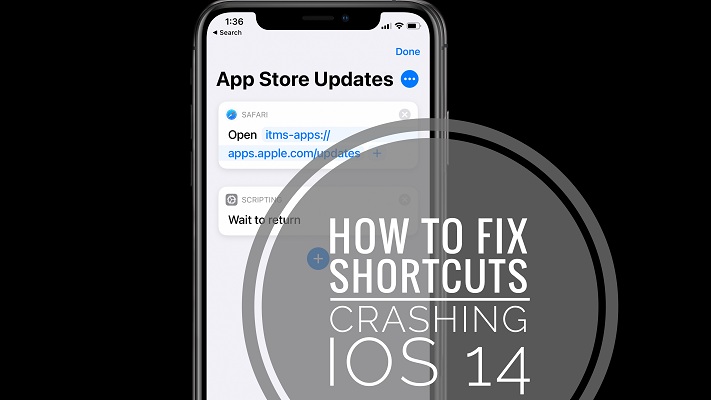 How To Fix Shortcuts Not Working

Are Shortcuts not working on your iPhone when you run them from Home Screen in iOS 14.3? More, are your shortcuts also crashing if you run them from the Share Sheet, or assign them to a Back Tap gesture? You’re not the first experiencing this issue!

Apple has changed the way shortcuts work in iOS 14.3. Opening a shortcut from the iPhone Home Screen won’t redirect through the Shortcuts app anymore. The experience is much more seamless and you’re only informed that a shortcut played out, via a notification banner that slides-in from the top of the screen!

Fact: The banner can be labeled as unobtrusive because it slides back out quickly!

Shortcuts Not Working In iOS 14.3

It’s unclear if shortcuts crash when opened from Home Screen , Share Sheet or Back Tap because of a bug, or because Apple changed the way they work.
However, we have a series of reports about the most simple shortcuts, like the one that open App Store Updates page from the Home Screen, that have stopped working since iOS 14.3.

How To Fix Shortcuts Crashing In iOS 14.3

Shortcuts seem to break because of various reasons. Here are some of the most common fixes:

Troubleshooting has to begin with a restart, to make sure that any minor execution glitches are flushed. Quickly click and release Volume Up, Volume Down, followed by a press & hold of the Side Button until the Apple logo is displayed on the screen. Be patient until the device restarts. Provide your Passcode and run the shortcut one more time.

Next, you can try to reinstall the Shortcuts app and start fresh. Do it from Settings -> General -> iPhone Storage -> Shortcuts. Here you have the option to Offload App. This will help you save app data and get your shortcuts back when you reinstall the app.

Another working fix requires you to add the 'Wait to return' code at the end of the shortcut and after exit points, like commands that open URL or similar.

4. Add Code To Open In Shortcuts

If you add the ‘Open Shortcuts’ action at the beginning of the shortcut, the command will be executed through the Shortcuts app, similar to how things worked in iOS 14.2 and earlier. This isn’t ideal, but it’s a temporary fix that will allow your shortcuts to execute until the issue is fixed.

How To: Open the Shortcuts app and browse to the shortcut that’s crashing. Tap the three-dots icon, available in the top-right corner of the tab. Hit the ‘+’ icon to add code. Search for the ‘Open Shortcuts’ command. Add it and drag it to the start of the shortcut.

Has one of the above tips helped you to fix shortcuts crashing in iOS 14.3? Which one? Share your feedback using the comments section. Don’t hesitate to mention a better fix if you found one!

Related: Did you know that you can use your iPhone as a morse code generator with the help of Shortcuts and the built-in Flashlight?

2 Responses to How To Fix Shortcuts Not Working On Home Screen In iOS 14.3