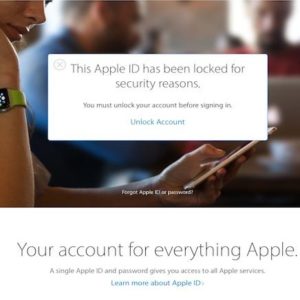 Apple ID locked out because of security reasons.

A strange occurrence is currently unfolding among Apple device owners. It seems that a series of users have been locked out of their Apple IDs in the past hours, without any obvious reason, although the message claims security flaws. Several readers have mailed us about this glitch and reports around the Internet, on websites like Reddit and Twitter, confirm that this isn’t an isolated case. Users state that they are kicked out of their Apple IDs because of security reasons.

Affected users confirmed that the lock out occurs without any warning while they use Apple Music on their iPhone or watch movies on their Apple TV. Same users confirm that they use two-factor authentication on their devices and their iCloud password is unique and not used anywhere else. This means that there isn’t a solid reason for locking out users out of their Apple IDs because of security reasons, unless there is a security breach on Apple’s side or a bug that’s causing this unpleasant issue.

How To Fix Apple ID Lock Out Problem
Currently, to get back into your iCloud account your have to reset your Apple ID password, as instructed here. Unfortunately, after accomplishing this you will have to manually log-in back to your Apple ID on every Apple smart device available in your house.
There is no official reaction from Apple at the moment of writing this article. @AppleSupport on Twitter is directing users with this lock out issue to the Support Communities website.
Fact: We will update this article as soon as we have an official fix from Apple, or an explanation for this strange problem!