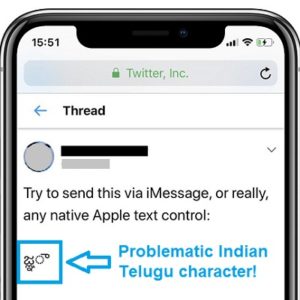 iOS 11.2.6 is Apple’s latest software update for iPhones and iPads. It was rushed a few weeks ago in order to fix and important bug that caused iOS devices to crash, because they where not able to render a certain character from the Indian language Telugu. If you’re receiving a message with the character displayed in the printscreen available nearby and the Messages app froze, don’t panic! All that you have to do is update to iOS 11.2.6 or later.

The Indian Telugu character is also affecting other popular iOS apps like Safari, WhatsApp, Facebook Messenger and more. It doesn’t matter if you receive a text containing it or open a web-page that tries to display it the app in question will freeze and you have to delete the conversation in other to quickly fix the issue. 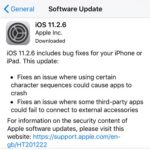 How To Upgrade To iOS 11.2.6
All iOS 11 compatible devices are able to upgrade to iOS 11.2.6, over-the-air, from the Settings app. All that you have to do is scroll for General -> Software Update and tap on the Download and Install button. Provide your Passcode, agree with terms and allow your device to update to the latest operating system version.
Tip: Make sure that your device’s battery level is above 50%, or have a charger nearby in order to be able to run the software update.

iOS 11.2.6 Update Log
According to the Software Update screen, iOS 11.2.6 comes with the following bug fixes:

Fact: iOS 11.3 is the next major software update that’s looming on the horizon!