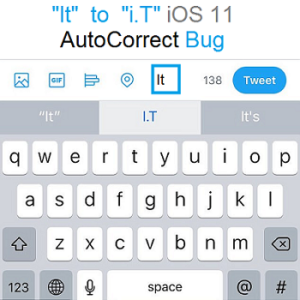 A few weeks ago, an annoying Keyboard bug flared up for numerous iOS 11 users. The glitch was affecting those iPhone and iPad users that were using Apple’s native Keyboard with the Auto-Correct feature enabled. Apparently, because of machine learning the letter “i” was automatically associated with an emoticon that wasn’t compatible with iOS 11 and the software autocorrected it to “A[?]”. The glitch was so widespread that the Cupertino-based tech giant released iOS 11.1.1 to fix it.

However, now a similar glitch is plaguing the iOS community. It’s true, this error is currently not that wide spread. For example, we couldn’t replicate it on our own devices, but we have several users complaining about the fact that their iPhones autocorrect the word “It” to “I.T” even when using the most recent iOS 11.1.2 firmware version. This means that whenever they type “It” the expression “I.T” is provided as a QuickType suggestion. When the user taps the space bar to write a new word, the autocorrection is made even without selecting the predictive suggestion!

3 Ways To Fix The “It” to “I.T” Autocorrect Bug
I assume that Apple will patch this problem in an upcoming software update, but in the meantime you can use these tips to temporarily fix the problem yourself:
1. Reboot Device
The first thing that you can do in an attempt to fix the problem is to force restart your iPhone and see if this solves it. It most probably won’t, so you could skip this step altogether.

2. Text Replacement
The next option is to use a clever trick that involves the Text Replacement feature. This is actually the temporarily fix recommended by Apple for the previous autocorrect bug described above. What you have to do is to trick your iPhone or iPad to use a shortcut manually coded by you and bypass its usual predictive text system:

3. Disable Auto-Correct / Predictive Features
In the worst case scenario and the 2nd trick doesn’t do its job, the only option left is turn off the Auto-Correct or the Predictive text feature altogether until Apple issues a software fix. You can do this from the same Settings app in the General -> Keyboard submenu.