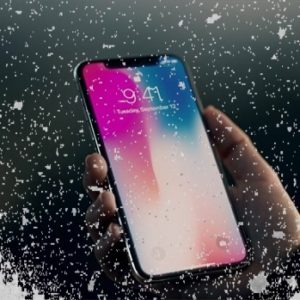 Is your brand new iPhone X not responding to taps and slides when you operate it in cold temperatures? Believe it or not, you’re not a the only one experiencing these problems. It seems that the 4-figure costly Apple flagships doesn’t like sudden temperature changes. A series of users have reported that the edge-to-edge OLED display fails to register any commands when the device is used in near freezing temperatures.

According to Apple, its iOS gadgets can be safely used between temperatures ranging from 0 to 35 degrees Celsius (32 to 95 Fahrenheit). Although these temperature values aren’t covering the entire spectrum needed, the iPhone X seems to fail even when before reaching 0 degrees. This only makes be to thing back at older iPhone models like the 5S and the 6 that were shutting down out of the blue, when exposed to freezing conditions.

All that you can do at this moment is allow your device to accustom itself to the new environment. It seems that that the $1000+ iPhone needs its seconds to recover before switching environments. Unfortunately, there is nothing else that you can do at the moment to fix the problem.
According to the guys from Loopinsight, Apple has acknowledged the problem and will issue a software update to fix it! So, stay tuned as we’ll instantly update you when this happens! It will be similar to the iOS 11.1.1 update released yesterday, to solve the iOS 11 Keyboard autocorrection bug!

Fact: We can only hope that this won’t become a chronic problem once the Winter season kicks-in and users will start hitting the slopes!