Although Apple has changed the way the new iPhone 8 and 8 Plus flagships are force restarted, brought into Recovery mode and DFU mode and more, surprisingly, the way apps are force closed on the 2017 iPhone flagships hasn’t changed. In fact, this trick has remained the same ever since the App Switcher was introduced in iOS 5.

All the above changes and most of the new gesture shortcuts coming in iOS 11 are caused by the removal of the Home button, in the iPhone X architecture. With this trend set, it’s predictable that Apple will ditch this physical toggle for good in all next generation iOS devices. The snowball has started and the Home button is slowly shifting its functions to other buttons or gesture shortcuts, even for those iPhone models that still feature it.

Why Should Your Force Kill Apps On iPhone & iPad
To get back to the subject of this article permanently quitting apps in iOS is a never ending debate with pros and cons for the feature. If you’re new to the smartphone world you should know that all apps that you open and use on your device remain active in the background when you exit them and switch for another screen. If the background app refresh function isn’t restricted, apps will constantly use your device’s Internet connectivity to update their data.
Tip: From my experience, apps like Facebook, Twitter or any other iOS software that you use often, like several times during the day, should remain open in the background, because it’s too time consuming to force quit it every time you exit it. Other apps that you use rarely can be force killed. You can make a habit of permanently closing apps that you use rarely every evening before you go to sleep!

How To Force Close Apps In iOS 11 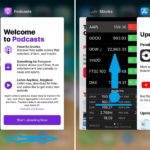 Now, let’s take a look at how to kill apps that are running in the background on your iPhone and iPad. In iOS 11 the procedure has remained the same for all iPhone models. A reason for this might be the fact that you can use 3D Touch for multitasking and invoke the App Switcher without the need of double-pressing the Home button.
1. Raise to wake your iPhone and unlock it with Touch ID, Face ID or Passcode depending on your model.
2. Open the App Switcher menu. Double-tap Home button on iPhone 8, 8 Plus or earlier iterations, or press firmly on the left edge of the screen and perform a half-slide towards the right to bring up App Switcher without pressing any button. This shortcut is available for all iPhones and iPads that are 3D Touch compatible.
3. Use your finger to swipe left or right between the cards of the open apps, lurking in the background.
4. When you reach the application that you wish to permanently kill swipe up, while placing your finger on the app’s preview card. Repeat the process for all apps that you want to force close. Tap outside of a card, or the Home button, when you finish, to return to the Home screen.

Tip: Do you know that you can kill up to three apps in the same time? Simply press three distinct fingers on the app’s card that you want to close and swipe up simultaneously!

Fact: Talking about apps. If you wish to enlarge your iOS apps collection and save money in the same time, I invite you to check our App Store Deals section available here.