How To Install iOS 11.2 Developer Beta 1 On Any Compatible iPhone And iPad 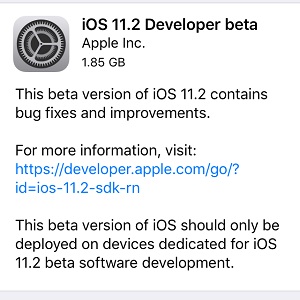 Apple has just seeded a new set of betas for compatible iPhone, iPad, Apple Watch and Apple TV devices. This new testing stage comes a few day before the public release of iOS 11.1, watchOS 4.1 and tvOS 11.1 software versions which are expected to premiere along with the launch of the iPhone X, on November 3. As always iOS 11.2 Beta 1, watchOS 4.2 Beta 1 and tvOS 11.2 Beta 1 are only available for registered Developers. Apple, usually releases a version for public beta testers, a few days later or starting with the 2nd Beta.

This means that if you aren’t a registered Apple Developer you can’t play with iOS 11.2 Beta 1. However, this is only partially true, because there is a workaround that allows any iPhone and iPad owner to install the 1st iOS 11.2 Beta on its device. Read on and find out how to proceed, but be aware that you will perform this trick at your own risk. This is why we strongly suggest you to perform a full iPhone backup via iTunes or iCloud before going for iOS 11.2!

How To Install iOS 11.2 Beta 1 On iPhone / iPad
Important: Please also check if your iPhone, iPad and iPod touch is iOS 11 compatible!
Registered Developer
If you’re a registered Apple developer things are straightforward. You probably have the iOS Beta Configuration Profile already installed on your device. If not, log-in to your Apple Developer account and grab the profile. Next, open the Settings app from the iOS Home Screen and browse for General -> Software Update. After your device locates iOS 11.2 Beta 1 tap on Download and Install and proceed as always with an OTA firmware update. 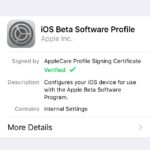 In this case you can opt to register as an Apple Developer, pay the annually fee and proceed as described above. Else, you have to grab the iOS Beta Software Profile from a third party source.
1. Install the iOS Beta Software Profile by copy/pasting this link in your Safari address bar:
goo.gl/YVfrC1. Choose the device that you want to install on, tap Install in the top-right corner, provide the Passcode, Agree with terms and restart the iPhone / iPad when ready. More details are available here.
2. After the restart tap on Settings and browse for General -> Software Update.
3. Hit Download and Install and be patient until iOS 11.2 Beta 1 is downloaded and deployed on your device.

What’s New In iOS 11.2 Beta 1
We’re currently toying with this latest firmware upgrade and will update this section until new features and changes are uncovered!