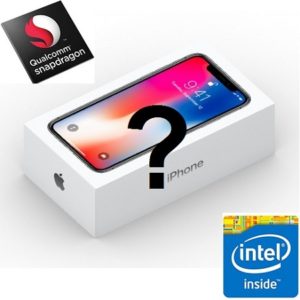 It’s widely known that Apple uses two LTE modem chip providers for its iPhone models. Neither Intel nor Qualcomm can cover alone the entire supply needed by the Cupertino-based tech giant. Because of this Apple uses chips from both manufacturers and assigns them to the iPhone X depending on the carrier technology and the market that the device is going to embrace on. For example, some countries focus on GSM networking, while others like the United States are also using the CDMA cellphone service technology.

As a rule of thumb most of us know that Verizon and Sprint sell iPhone X models equipped with Qualcomm LTE chips, while AT&T and T-Mobile retail the iPhone ‘Ten’ with an Intel modem. Apple claims that there is absolutely no difference between the two options. However, multiple tests, highlighted by PCMag, have shown that Qualcomm’s hardware outperforms the Intel powered modem in download speed on the most common LTE bands used in the United States.

2 Steps To Identify The LTE Chip Provenience In An iPhone X
So, if you haven’t upgraded for the iPhone X yet and want to get your hands on one that runs a Qualcomm LTE chip, here is what you have to do:
1. Find Out Model Number 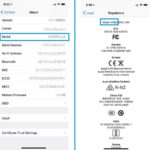 If you buy the device from an online or offline Apple Store make sure that you check what iPhone X model numbers you are getting. The info is also displayed on the backside of the packaging.
If you purchase a previously owned iPhone X you can check the model number both on the device’s box, as well as within the Settings app. Tap on General -> About and scroll for the Model info.
Trick: Tap on the Model part name “MQCP2LL/A” to switch to the actual model number!
Tip: The model number is also displayed on the Settings -> About -> Legal -> Regulatory screen.
Fact: If you purchase a sim free iPhone X from Apple you’ll most likely be served with the A1865 model, because this is the version that supports all 4 U.S. cellphone carriers!

2. Model Number Meaning
Apple manufactures and sells three different iPhone X models labeled as A1865, A1901 and A1902. Here are the differences:
iPhone X A1865: This model is sold in the United States by Apple, Verizon and Sprint. It packs the Qualcomm MDM9655 Snapdragon X16 LTE modem which is compatible with the above mentioned CDMA-based carriers. This model is also sold in Australia, New Zealand, China and Hong Kong.
iPhone X A1902: is also hosting the Qualcomm MDM9655 Snapdragon X16 LTE chip. This model is manufactured for the Japanese market.
iPhone X A1901: is equipped with Intel’s XMM 7480 modem that’s compatible with GSM carries like AT&T and T-Mobile in the U.S. This model is also sold in Canada, Mexico, Europe, Singapore, South Korea, United Arab Emirates, Malaysia, Philippines, South Africa, Argentina and Russia.